There's nothing cooler than vintage photos, and these are just awesome! A friend of ours, Bob Garland, recently shared some photos that he took at the Bristol Spring Nationals in June of 1965.

At first, we were going to just share the Mustang ones, but they are all so darn good, we decided to share them all.

Bob also shared the story of how he drove down to the race and slept in his 1965 Mustang fastback. He also mentioned that he's pretty sure that he didn't get too much sleep!!

Check out the images of the A/FX Mustangs with the 427 SOHC engines that were campaigned and sponsored by Al Swenson Ford and Tasca Ford, Honest Charley by the "Honest Charley" lettered 1965 Mustang fastback pictured with John Holman, the Phil Bonner Mustang, Hemi Under Glass, Jack Chrisman Comet, Richard Petty (yeah, he was drag racing!!), and more!

Enjoy, and thanks to Bob for sharing these incredible pictures!! 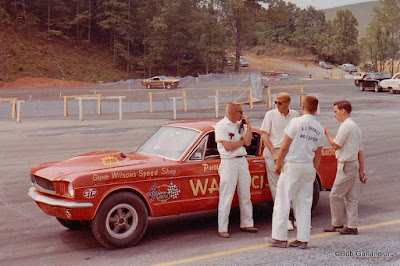 These are a treasure trove! Thanks!!