This is a brand new book that just arrived, and I really like it.  It is called Jerry Heasley's Rare Finds:  Mustangs & Fords.

Oh, and here is the "official" description of the book from the publisher:


During the 1960s and 1970s, all the major Detroit manufacturers made legendary muscle cars, and Ford was no exception. Shelby Mustangs, Cobra Jet Mach 1s, big-block and Hi-PO GTs, Boss and Talladega prototypes, K codes, S codes, and R codes, all familiar terms to Ford performance enthusiasts. Shockingly, even with how popular many of these models were, there are still long-lost examples turning up in barns, garages, backyards, and yes, pastures.

Some of these lost Mustangs and Fords were forgotten by owners, shuffled between family members, or simply parked to become non-descript garage fixtures. Some have lived hard lives on the street and in competition, and then been neglected and abandoned. Many of these Mustangs and Fords are among the most valuable and collectible cars Ford has ever built. These automotive jewels have been waiting for a dedicated enthusiast to rescue them from obscurity. In order to find these rare rides, collectors have had to do extensive research, fact checking, searching off-the-beaten-path locales, and make hundreds of phone calls.

As the automotive Indiana Jones, Jerry Heasley has been tracking down and documenting the stories of the rarest and most sought-after Mustang and high-performance Ford rescue stories for years. In this follow-up to the top-selling Jerry Heasley's Rare Finds, Heasley has built a collection of his finest stories, including the 1969 Boss styling prototype that was owned by Ford stylist Larry Shinoda, the original 1967 Shelby Mustang prototype that would become several other test cars, and a rare 1965 Shelby GT350R.

We posted last week about the new restoration project that just arrived at Maple Hill Restoration.  Being big 65-66 GT350 fans, we will be heavily involved in the research of this car along with, obviously, the restoration parts supply.

Today, we have lots of detail shots for you geeks like us.  If you regularly read our Blog, you are probably used to these type of images.  Be sure to take a close look at each image.  This car is in very nice condition.
Check out the images of the original 289 Alternator Belt and those super nice ten spoke wheels!


We have a great selection of cool metal signs featuring various Ford Mustang and Shelby logos, cars and vintage pictures.

Here are our two latest signs.  Both are 11" x 17" powder coated metal signs with the images embedded in vibrant color.

The part number on the Memorial Carroll Shelby sign is AC-469.

The other new sign below was made from a scan of a Shelby Parts Accessory Catalog Cover.  It is our part number AC-468.

An exciting car just arrived at Maple Hill Restoration.  It is a Sapphire Blue 1966 Mustang Shelby GT350.  This is going to make a super nice car and a complete restoration is planned.

This is a super nice and complete GT350.  It was purchased new at Hi-Performance Motors in California.  It was originally delivered with the optional ten spoke cast aluminum wheels and a 4 speed transmission.  The owner even still has the original window sticker!

I can't wait to share more pictures of this car!  Check out the images we have here along with the captions, and look for more here on the Virginia Classic Mustang Blog this upcoming Monday.

We were really excited to get this new book, The Definitive Shelby Mustang Guide:  1965-1970.  Our friend and Shelby American Automobile Club (SAAC) Registry Co-Author, Greg Kolasa has been working hard to put out this great, new book.

Check out the publisher's description:

All car enthusiasts know about Shelby Mustangs, but what really separates them from their production-line relatives? What really makes a Shelby a Shelby? This new book from Shelby American Auto Club (SAAC) historian and registrar Greg Kolasa details the specifics on the performance and appearance alterations with both descriptive text and superb photographs.

This book gives a detailed look at both the performance and styling characteristics of each year of the 1965-1970 Shelby Mustangs in text, photographs, and charts/graphs and clears up many myths and misconceptions surrounding these legendary pony cars. In addition to his firsthand knowledge, Kolasa relies heavily on factory documentation and interviews with Shelby American designers, engineers, stylists, fabricators, and race drivers to get the true, as-it-happened story of these phenomenal pony cars. Additionally, the cars included in the book were chosen specifically for their historical and technical "correctness."

The Definitive Shelby Mustang Guide: 1965-1970 will serve as the illustrated Shelby Mustang sourcebook for years to come. For Mustang and Shelby enthusiasts especially, but even for general automotive historians, no automotive library would be complete without it.

Order by clicking here - our part number is LT-183.

Our part number for this new item is SM-814.

Please note that a different, shorter style of this plate was used on earlier cars with an approximate build date earlier than April 1965. 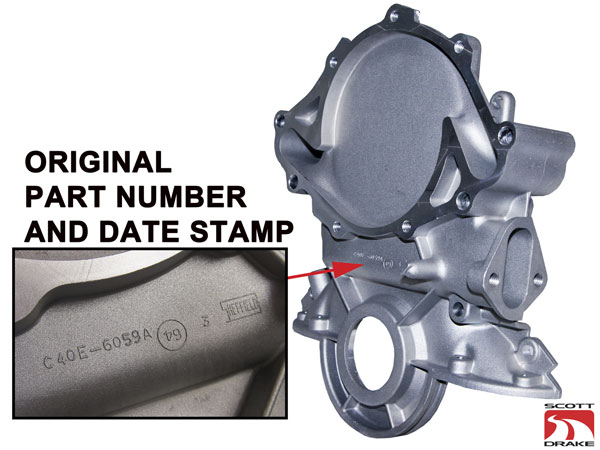 We now have a really nice reproduction of the timing chain cover used with the aluminum water pump on the 1964 and early 1965 260 and 289 Ford Small Block Engines in the Mustang.  This one is different from the timing front cover that was used later with the cast iron water pump.

This early timing chain cover is deeper where the water pump bolts on to allow clearance for the exposed impeller on the aluminum water pump.  This cover is made by Scott Drake Mustang Parts from high quality die-cast aluminum like the original.  It features a built in timing pointer along with the Ford engineering number, date stamp and manufacturer logo.  The detail on this front cover is extremely nice.

Please note that this cover does not have the provision for the oil filler tube that is found on the very early generator equipped cars.

This is a great brand new part that has never been available as a reproduction.  These new Front Disc Brake Splash Shields / Backing Plates are made just like the original 65-66 Mustang and Shelby design plates.  The previous reproductions are actually copied from the '67 Mustang style splash shields.  These '67 are still available and will actually fit 65-66 Mustangs while offering better venting.

Now you can replace your missing, pitted or bent original splash shields with these new, correct shields.

The part number on the new correct 65-66 style brake shields for the Mustang is BK-3481.  These are sold as a pair.

The 67 Mustang style shields are sold individually.  The part numbers are BK-348L and BK-348R.


Today we have some more pictures of the 1965 Mustang Convertible being restored by Jeremy Turner at Maple Hill Restoration.  You can check out Maple Hill's web site at www.MapleHillResto.com.

This Mustang is being painted Twilight Turquoise.  Please note that due to the flash and lighting that the color does not look exactly the same in all of these images.

In this pictures, Jeremy has painted the underside of the car in the correct gloss black like original.  This was matched to the original finish on this January '65 production, Dearborn plant Mustang Convertible.  You can also see how the body color (Twilight Turquoise) paint was applied over the black, duplicating the original spray patterns.

The engine compartment was then painted with a black that is not as glossy as the underside, again, duplicating the original finish. 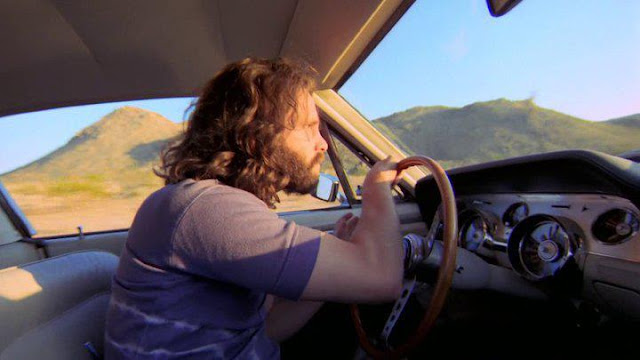 Many of our readers may know that Jim Morrison from The Doors owned a 1967 GT500 Shelby Mustang.  It was nicknamed "The Blue Lady."


﻿﻿
﻿﻿
I am re-posting this Blog post that was originally published in December of 2010.  It was one of our more popular posts, and I've sent it to several people just this week.

Also I'll mention that you can now Friend Us on Facebook!

If you are really into the detail end of the 65-66 Mustang and Shelbys, you may find this post interesting.  A Kelsey Hayes disc brake proportioning valve was originally installed on the 65-66 Mustangs with factory front disc brakes.

Jeremy at Maple Hill Restoration did the paint work on this.  He also does the restoration work on the 1965 Mustang 289 HiPo convertible that is featured on our Blog.  He will soon start on our Carryover 1966 GT350 Shelby.  You can contact Jeremy by going to his web site at www.MapleHillResto.com. 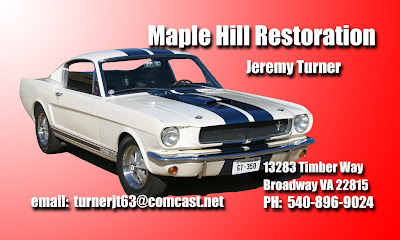