We love to see our customers' Mustangs. Here's a 1964 1/2 Mustang Coupe sent in by a customer who has been buying parts from Virginia Classic Mustang for nearly 30 years! 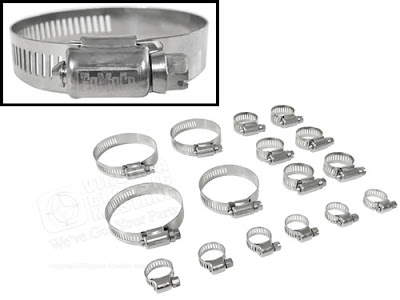 We have the correct tower style Wittek hose clamps, but if you want easy to use and re-usable clamps, you may want to consider our new worm gear hose clamps. These aren't just any hose clamps either! They are the perfect "finishing touch" to your Mustang with the cool FoMoCo logo right on the top. Note: Only the small fuel line clamps do not have the FoMoCo logo.

They are not generic hose clamps. These clamps are sized properly for a clean look with no excess "tail" after tightening. Stainless steel construction means they won't rust.


Note: These will not fit a 6 cylinder. Kit will work on big blocks with the exception of one lower radiator hose clamp at the water pump (it is too small).

Our part number is PE-102S. Check them out by clicking here. 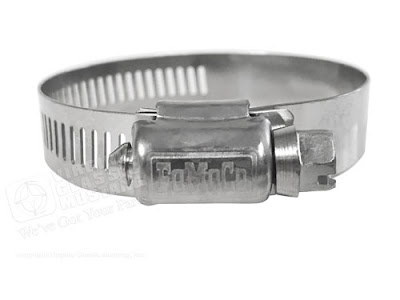 Now available! 1966-71 Mustang 6 cylinder gas line clip. This is the hard-to-find spring clip that mounts on the valve cover.

The part number is ER-3312. Click here to see more and/or order.

The Scottsdale, AZ auctions in January of each year are always big events. With its TV coverage, the Barrett Jackson Auction is the biggest and most talked about.

For the early Mustang and Shelby fan, the most publicized sale of the 2017 auction was the 1965 GT350 Shelby Mustang that hammered for $405K. With the buyer's fee, that's $445.5K! The serial number is SFM5S219, and it featured a Paxton super charger added by a previous owner.

The Petersen Museum in Los Angeles, CA (www.petersen.org) is a really cool place. If you are a car guy or gal, it should be on your bucket list. It's even better to visit when Shelbys are involved!

This past weekend, they held their annual Shelby Cruise-In. Being all the way across the country, we (like probably a lot of our readers here) were unable to attend. Fortunately, we can experience it through the great pictures from our friend and fellow blogger, ShelbyGuy. Please check out his blog with more pictures at the following link:  https://www.shelbyguy.net/single-post/2017/01/18/2017-Shelby-Cruise-In

This cool '65 Mustang Fastback is equipped with the rare Dagenham 4 speed transmission behind the durable 200 cubic inch 6 cylinder engine. It has been listed on Craigslist by a friend and customer of ours from New York.

1965 Ford Mustang 2+2 Fastback. A great rust free original car.Built at the San Jose, CA plantEngine: 200 cid 6 cyl.Body: 2+2 FastbackPaint: Tropical TurquoiseInterior: White Crinkle Vinyl with Black Appointments, StandardBuilt: October 07, 1964DSO: Denver CO.Axle: 3.20:1 ratioTrans: 4 speed manual Dagenham TransmissionOriginal Door ID tag.Mild restoration in the late 80'sPurchased new Colorado Springs, CO.Second owner purchased in 1982: Salina, KS.Third Owner: Purchased in 2012 out of the estate.Dealer installed Air conditioning. During restoration the compressor was upgraded and recently it was converted over to R-134.Recently installed new exhaust system.Factory Rally Pac ( 6000 rpm tachometer and clock) All the original sheet metal is present with exception of driver side quarter panel that was dented so it was replaced. I have a photo of car during restoration. Never any rust or rust repair. A nice tight original fastback.Early features true to this car. Vinyl along inside rocker panel, Squared off 64 sillplates, Early door and window handles, Carriage bolt bracket for spare tire hold down, Threaded base wiper arm posts, Three wire heater motor.i was told the restoration included a complete bare metal repaint to the original color Tropical Turquoise rebuilding of the engine and carburetor. New radiator, Interior upholstery dash door panels and handles and headliner.Bran new whitewall radial tires with original hubcaps.Fastbacks were introduced on August 17th, 1964, so this car was built only 6 weeks into production. While I have another project to work on, I'm not in a position to take any trades. Thank you.

Links to this post
Email ThisBlogThis!Share to TwitterShare to FacebookShare to Pinterest
Labels: For Sale, Mustang For Sale

Engine to Firewall Ground Straps were installed on all Mustangs from the factory. Originals are almost always cracked and brittle from age and heat from under the hood.

We have a complete line of straps, including our new '65-67 Mustang / Shelby version, which features the correct "FDA-14303-A SX FOMOCO" markings. They are all made in the USA! This is a great and correct detail for any Mustang or Shelby. We also have the correct mounting hardware.

Here's the run down:

Well, we can't wait until spring, it's January now and that means cold weather and sometimes snow in Virginia.

Here's a great picture from one of our customers and friends of his gorgeous 1966 GT350 in the snow! It's quite appropriate for this single digit degree morning in Virginia!


One of our first posts here on the Virginia Classic Mustang Blog way back in 2008 was about the unique and rare Mustang Towne Top. This was a hardtop made for the '65-66 Mustang by Dory Development Corporation.


We recently ran across some literature about the hardtops that we had never seen.

For more about the the tops, we are re-posting much of the original Blog post from 2008...wow, has it really been that long!!??