The restoration of carryover 1966 GT350 6S033 continues as Jeremy Turner at Maple Hill Restoration works on the components.  The goal is to have all the parts ready to install after the car is painted.  That way the assembly will go much quicker.

Today, we have a few pictures of the seats.  The frames were inspected, glass beaded, prepped, primed and painted.  New burlap was installed to prepare for the foam and seat upholstery.  There are still a few details to finish up like the seat backs and seat side shields, but they are almost complete.

For more information on the early carrover '66 Shelbys, see www.CarryoverGT350.com.

Originally, both doors and the ignition switch used the same key on the '65-66 Mustang.  Over the years, one or lock cylinders are replaced, and you end up with multiple keys.  It's also common for cylinders and/or keys to just get worn too badly to continue using.

Whatever the case, we have super nice lock sets that include matching door and ignition cylinders.  They come complete with retainers for the door lock cylinders and pre-cut, correct Pony / Ford keys - just like the originals.

This kit is one of our most popular items and are very reasonably priced.

Our part number is IN-501.  Other years available.


We now have the dash speaker and defroster vent grill cover that fits in the center on the dash pad on 1965 and 1966 Mustangs.

This is a stamped metal part made just like the original.  It comes in black but, of course, can be painted any interior color. 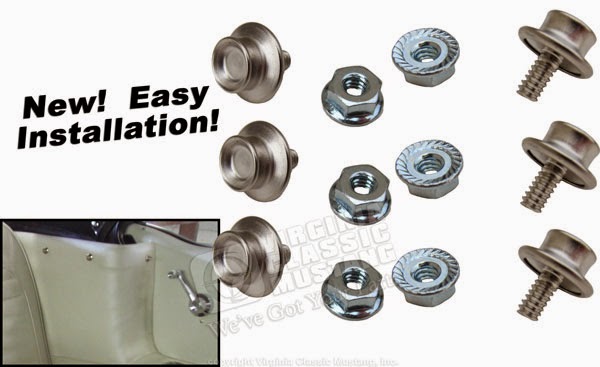 Have you ever tried to install those original style Mustang convertible quarter trim snaps?  By "original style", I mean the ones that are basically tubular rivets on the backside and require you to expand the rivet to make them tighten in place.  It's very difficult.

Well, an easier solution is now available!  Our new 65-68 Mustang Convertible Quarter Trim Snaps have a threaded stud allowing you to install them by simply tightening the supplied nut.  The snap seen from the front looks exactly like the original.

If you missed Part 1 of our coverage of the NE Regional SAAC Meet, click here for the other pictures.  We pick up Part 2 with our lunch stop at Performance Motors of Hanover.

Here is the description of the event just in case you missed it:

The Fifth Annual Shelby American Automobile Club NE Regional was held October 16-19, 2014 in Gettysburg, PA.  This event was put together by the Lehigh Valley Region of SAAC.  For the fifth year in a row, they did a fantastic job.
This event is somewhat unique in that it features a Saturday road tour.  The tour is about 60 miles long with a few stops in order to keep all of the cars together, visit points of interest, and to eat lunch. The tour was extremely successful with a record number of over 70 cars participating.
We drove our recently completed '66 GT350 and had a blast.  Stops included the Eastern Museum of Motor Racing and Performance Motors of Hanover.  The Museum has lots and lots of memorabilia and cars to view and Performance Motors of Hanover's showroom is absolutely incredible.  The lunch provided there was also very well received.
Saturday evening featured an ice cream social and evening program.  The event wrapped up Sunday with a popular vote car show.
If you weren't lucky enough to attend, you may want to pencil it in for next year.  The cars, and especially the people, always make it a great time!

The Fifth Annual Shelby American Automobile Club NE Regional was held October 16-19, 2014 in Gettysburg, PA.  This event was put together by the Lehigh Valley Region of SAAC.  For the fifth year in a row, they did a fantastic job.

This event is somewhat unique in that it features a Saturday road tour.  The tour is about 60 miles long with a few stops in order to keep all of the cars together, visit points of interest, and to eat lunch. The tour was extremely successful with a record number of over 70 cars participating.

If you weren't lucky enough to attend, you may want to pencil it in for next year.  The cars, and especially the people, always make it a great time!


The 289 High Performance Mustangs came equipped with an open element 14 inch chrome air cleaner assembly.  These air cleaners were also used in the popular engine dress up kits that were marketed by Ford.

We have a few different versions of these air cleaners available, including a show quality reproduction that is exactly like the ones originally installed on the '65-66 289 HiPo Mustangs and '65-66 Shelby GT350s.

Now we have an air cleaner that is exactly like our correct assembly, but it features a chrome lid with raised COBRA lettering.  Like our other air cleaners, it comes complete with the correct round hole air filter and base.

As you know, we are big fans of the early 289 High Performance Mustangs.  Because of this, we are super excited to announce the availability of these new, unique chrome air cleaner assemblies.  These air cleaners were installed on the '64 1/2 HiPo K Mustangs and are commonly referred to as "double hump" air cleaners, referring to their uniquely shaped top lid.

These air cleaners were also installed on 260 & 289 Cobras, early Falcons, early Fairlanes, and other early Fords.  Recently, they have been very difficult to find, and the prices have reflected their rarity.

This is a super nice reproduction and comes complete with the correct round hole air filter and a stamped steel base.  The base is painted semi gloss black and does not have a provision for a hose.

We are thrilled to wrap up our "clean up" of our green 1966 Shelby.  If you missed our previous posts about this car, please click here and scroll through the posts to read more.  This car was purchased in the Fall of 2013 from the long time owner.  It was really a barn find, and while it was nicely maintained by the owner, it needed quite a few things to bring it up to super reliable standards.  The great work was performed by Jeremy at Maple Hill Restoration.


We were lucky, because this Shelby was in amazing shape for its age.  It had been properly stored for years and does not have any rust.  The floors just required cleaning to reveal the original red / brown sealer.  The entire brake system was rebuilt, including the original rear wheel cylinders, front brake calipers, proportioning valve, and master cylinder.  All of the brake lines and hose were also replaced.

The same thing was done with the original front suspension and fuel system.  Other areas, including the interior and engine compartment, were carefully cleaned to maintain much of the car's originality.

The Shelby was painted way back in the late sixties or early seventies, and the paint is far from perfect, but it was also cleaned and certainly is presentable as is.

We did pull the engine in order to properly paint it since the previous owner had painted the block and heads black.  It now sports the correct, original blue color.


The Shelby's debut is planned for this coming weekend at the SAAC NE Regional Meet in Gettysburg, PA.  This is always a fun event with a cool road tour, lots of socializing with friends, and a Sunday popular vote car show.  We will be posting lots of pictures next week for you from that event.