Adding an export brace to your Mustang can be a great improvement. It really eliminates a lot of "flexing" that is common in a unibody car such as an early Mustang. These braces were originally installed on Mustangs that were exported out of the country. They were also installed on the early Shelbys.

When installing an export brace, please be aware that the shock towers often may be slightly "leaned in" on some cars due to rust or collision damage.

We have two qualities of export braces. One we call a standard quality, and the other is called concours quality. The concours quality export brace is easily worth the extra money. It was made using the original Ford Blueprints. The fit is much better, the stamping is much deeper, and the overall finish and quality is just much nicer. We also have the correct 65-66 Shelby GT350 Export Brace. It is different from the others in that the mounting holes above the firewall are evenly spaced.

Here is a list of all the braces that are currently available:

We have a handful of original Ford Turn Signal Switches remaining and are told that they will no longer be available.  If you need one, please order soon.  Ford part number is C5OZ-13341-B.

If you don't need a Genuine Ford Switch, the reproductions are a lot cheaper and very nice.

Give Your Mom a Ride

OK, OK, it's not a Mustang.  Heck, it is even a Corvette, but this is just plain entertaining.  This guy gives his mom a ride around Laguna Seca race track in a Z06 Corvette.  Thanks for sending the link, Dave.  I need you to start posting to the Blog. 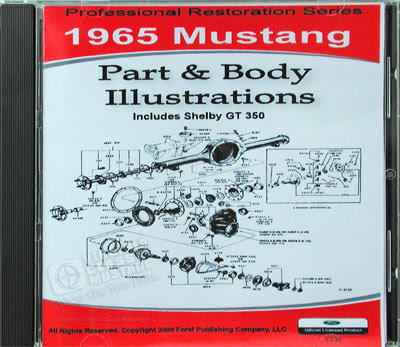 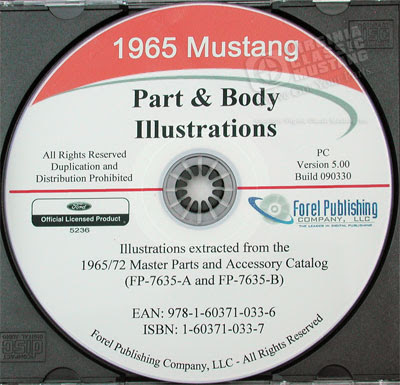 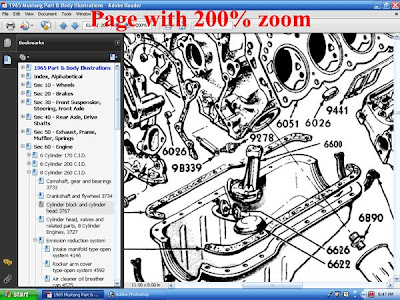 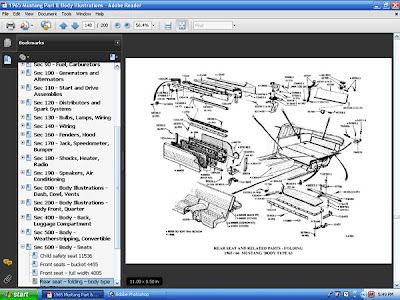 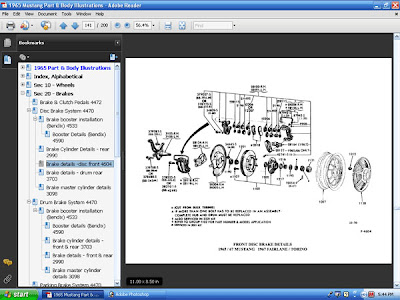 Our Mustang Parts and Body Illustrations Manuals on CD are very valuable tools when putting together a Mustang.   These are available for all model years from 1965 to 1973. Each manual is a comprehensive collection of detailed part and body illustrations that are extremely useful for any restoration project. For example, part illustrations are “exploded” to show not only the parts of a component, but can be used to identify the basic part number of virtually every nut, washer, etc. The exploded body illustrations show the locations of trim pieces, mouldings, weatherstriping, how sheet metal was assembled, etc. All illustrations are from an original Ford Motor Company publications so you can be assured of its accuracy. With extensive bookmarks and indexes, finding the illustration you need is easy. If you want to make your restoration project a lot easier, this is the manual you should have!

These are also available for Instant Downloads by clicking here!!


- Indexes, both alphabetical and numerical (to find illustrations easily)


Here are the links to order each of the model years:

Email ThisBlogThis!Share to TwitterShare to FacebookShare to Pinterest
Labels: Literature


I think that it is always cool to see vintage film footage of cars.  This one was forwarded to me by a buddy.  It was shot in San Francisco in the sixties of an SCCA race at Candlestick Park (Candlestick Point).  Of particular interest here are the GT350 Shelbys and Cobras.

This video was forwarded to Chuck Cantwell, who was the Project Manager for the GT350 at Shelby American at that time.  He made these comments:

Dave,
That is really interesting footage. I was there for that race. The San Francisco Region paid several drivers/owners to come. That’s why we had Phil Hill in the Cobra and Ed Leslie in the first GT350 (5R002, which I had won the Willow Springs Nationals the week before in), besides jerry Titus in the GT350 (5R001, the second racer we built), and as well as Jim Hall in the Chaparral. That was a particularly dangerous course with electric poles along the course in places and some huge (10 ft. cube) concrete blocks outside the corners at another place. Two drivers died that weekend, one a McLaren which hit one of the poles, knocked down some wires and burst into flames. And Milt Minter rolled his Lotus Super 7. The E-Jag in the pics was Merle Brennan’s Huffaker Motors car from San Fran who finished 3rd in the division after Jim Adams in the Hollywood Tiger and Jerry Titus in the Shelby GT350. At Candlestick, Jerry finished 1st and Ed Leslie finished 2nd. Those photos were neat to see. Thanks for forwarding them.
Chuck Cantwell

Thanks so much to my buddy, Dave Redman for forwarding this video to me and to Chuck Cantwell for the great comments!!

OK, it isn't a Mustang, but we think it is pretty cool.  How about a 65 Falcon Ranchero with a Paxton Supercharger!


We have been working hard on our new edition of our print catalog featuring all of our 1964 1/2-73 Mustang Parts and Accessories.  We hope to have that completed in the next 6-8 weeks.  This catalog will be definitely worth the wait with tons of new vintage Mustang parts.  If you have requested a catalog or purchased something in the last couple of years, you will be automatically mailed one when it is printed.  In the meantime, just check out our web site, www.VirginiaClassicMustang.com, for the latest Mustang parts and prices.

Many of you have been reading about the restoration of our 1965 Mustang HiPo Convertible, and it is completed now.  We thought that you may want a sneak peek at the Mustang Parts Catalog featuring the Convertible.

Thanks to Troy at Custom Show Boards for his creative "tweaking" of the front cover photo and to Todd, our web designer, catalog designer, and overall graphics go-to guy at Loafin' Tree for the graphics and overall design.

This new 15 x 8 size gives you that great depth on the rim and that wide stance, and particularly looks good mounted on the rear.

These wheels feature an all chrome rim, so you don't have to use a trim ring.  They look great on all Fords, not just Mustangs.

We also have the center caps for these wheels.  They are available plain and with the GT emblem.

The 66 Shelby GT350 Mustang has a unique Magnum 500 wheel that you just don't find on other cars.  The difference is the unique rim configuration with the long first "step."  These wheels were difficult to find even over 25 years ago when I restored my first GT350H (Hertz Shelby.)

All of the 1966 Hertz GT350's came with this unique chrome Magnum 500 wheel.  There were a few other '66 Shelbys that originally were equipped with this wheel in chrome, and many other '66's had the same wheel in a painted finish.

This unique Magnum wheel is now available as a brand new part, and it is made in the USA.  Yeah, it is more expensive than our "standard" Magnum 500 wheels, but if you need the correct wheel for your '66 Shelby, this is it.

A customer recently sent us this flyer advertising his 1966 Mustang Fastback For Sale.  We thought that we would share it here in case any of our readers are interested.

We just had to post these cool pictures that a customer from Australia shared with us.  His daughter just got married, and his Mustang made a special appearance!
Here is part of his message:
Mustang parts courtesy Virginia Classic Mustang "we got your parts" which were delivered last week just in time to get the car mobile again!!

On September 2-4, 2011, the National Capital Region Mustang Club will host the Mustang Club of America's 2011 Grand National Show.  This will be a huge event that you will not want to miss.  It will be held at Regency Furniture Stadium in Waldorf, MD.  Virginia Classic Mustang Inc is proud to be a Gold Sponsor for the show.

For more information and registration forms, please click here to be directed to their web site.