The Carroll Shelby Tribute and Car Show was held May 21, 2016 at the old Shelby Headquarters in Gardena, CA. This event is held annually, and the 2016 one was the fourth annual show. We weren't lucky enough to attend, but our friend, John at www.shelbyguy.net took some fantastic images. 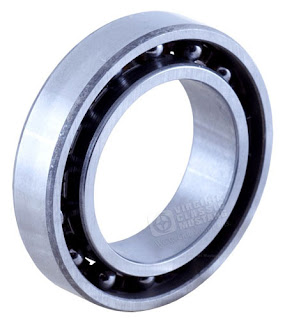 We've received lots of calls for this particular Mustang Steering Column Bearing. It hasn't been available for quite some time, but now they are here!

It's been several months since our last update on our '66 Shelby restoration. This is 6S033, an early Carryover car. The Carryover cars were actually '65 Mustangs that were ordered by Shelby American to convert to the first 252 '66 Shelbys. Read more about these unique cars at www.CarryoverGT350.com.

Check out the latest pictures and be sure to read the comments under each image.
The original 9 inch rear end and leaf springs have been mounted and the Shelby is rolling on original 15 x 6 steel wheels and new Goodyear Blue Dot tires. The image below shows the "K" markings that were originally on the bottom of the front of the radiator support.


The above image shows another original marking that was just duplicated on the front frame rail.

Many underdash items have been installed, including the air vent, parking brake assembly, pedal assembly, heater box, and more!

The headlight wiring harness has been run in the engine compartment area.

The below picture shows the dash with the glove box door and radio installed.

The above image shows the original markings in the upper control arm. The "E5" represents May of 1965.

The images below shows the stamping on the lower control arm. It was stamped with the year only.

It's rolling on its own 4 wheels and tires now...off the rotisserie and roll arounds!!!

The original lens was installed in a new glove box. The lens was originally stapled into place, although the staples are only visible from the back side. They did not go all the way through the cardboard glove box.

The original paint overspray was duplicated on the rear bumper guards.


We now have a nice selection of full outer wheel houses for Mustangs. These are the complete rear wheel houses with inner and outer pieces. They are available for most models from 1965-70.

To All Mustang Enthusiasts Worldwide

As the Executive Director and co-Executive Director of the Mustang 50th Birthday Celebration, held April 16th to 20th, 2014, Ron Bramlett and Steve Hall looked at many different ways to bring as much public awareness to the Mustang 50th event and the Ford Mustang as possible. While many of their ideas were put into place, such as the Pony Drives from many different cities in the United States into Norman, Oklahoma and the onward to either Charlotte Motor Speedway in Concord, North Carolina or Las Vegas Motor Speedway in North Las Vegas, Nevada, many ideas didn't come together and never became a part of the Mustang 50th. One of these ideas was to have a temporary Mustang Museum at one or both of the show sites with the hope that is might live on after the 50th.

Being involved in the Mustang hobby for many years, Ron and Steve both felt that of all the American cars produced, the Ford Mustang was the most deserving to have a museum in it's honor. They felt it was a shame that after 50 years of continuous production and millions produced, there was not a place where Mustang enthusiasts from all over the world could come and enjoy the Mustang in a museum setting. The Mustang was such a huge success that the one millionth Mustang was produced on or before Wednesday, March 2nd, 1966, just 1 year and 362 days from the first day of Mustang production, Monday, March 9th, 1964*. By contrast, the Chevrolet Corvette, which we all know has had it's own museum for many years, didn't reach a million in sales until 1992, 39 years into production. During the two years of planning for the Mustang 50th Birthday Celebration, the Mustang Museum was looked at and discussed, but never acted upon. The Mustang 50th Birthday Celebration came and went without a Mustang Museum at either of the two locations being a part of it.

Fast forward to December of 2015. Ron and Steve had never forgotten about the possibility of starting a Mustang Museum and had talked about it constantly after the 50th. Then, all of the pieces that would make putting the National Mustang Museum a reality started to fall into place. A chance meeting with Donna Carpenter of the Cabarrus County Convention & Visitor's Bureau (CCCVB) in Concord, North Carolina started Steve thinking about Concord as the location for a Mustang Museum. Concord is a very car-centric location for the east coast, being the home of the Charlotte Motor Speedway, and his and Ron's relationship with everyone in the area during the Mustang 50th was exceptionally good. Especially with the CCCVB. Steve called Ron that night and asked him what he thought about Concord as a location for a Mustang Museum. Ron agreed that it would be a great location.

Steve scheduled a meeting with the city and county officials of Concord and Cabarrus County who were extremely excited about Concord being the home of the National Mustang Museum. They made it very clear to Steve and Ron that they would support the museum in every way they possibly could. To Steve and Ron, this was a really big step forward towards making the project a reality. With the support of the city and county in hand, Steve and Ron moved forward with trying to put all of the pieces together. Steve met with many people in the area who were very excited in seeing the museum located in Concord and pledged their support.

In February of 2016, a location was found that is located about 2 miles from the Charlotte Motor Speedway. As of this writing, Steve and Ron are in the planning stages of building a new building and parking lot for the museum at that location. They are very close to making it official and being able to place a large sign on the property announcing this will be the home of "The National Mustang Museum" with a planned opening in the summer of 2017. However, before they can do that, they want to be sure that they have the required government permission and all of the proper building permits to do so at this location. Once they have these in hand, they will update the website with that information and the address that will become the home of the National Mustang Museum.

As more and more plans are being made and the project gains momentum, more and more people are becoming aware of the project. That is why this information, as little as there is, is here. Steve and Ron want to make sure that accurate information, even though there is not much of it yet, is available to the Mustang World. This website will be the best place to receive all of the updated information on the National Mustang Museum. Steve and Ron are planning a "Ground Breaking Dinner and Ceremony" as the first of many Mustang events to be held during the building process. They are planning a dinner the night before to benefit the museum and are looking for Mustang enthusiasts to bring their Mustangs to the event and be able to take pictures of their Mustangs and themselves at the National Mustang Museum building site during the Ground Breaking Ceremony. Also, a yearly event is already being planned to take place at the museum for National Mustang Day, which will be every April 17th.

Steve and Ron's vision of the National Mustang Museum is for it be an always evolving Mustang experience, not just a static museum filled with the same Mustangs and Mustang memorabilia every year. They are going to to be looking for Mustang enthusiasts to bring their Mustangs to the museum for events, for display, and to be involved, not just to come and look. They will want Mustang enthusiasts to wonder what they will see the next time they visit the museum and to set the museum's address and location in their GPS when traveling through the Concord area.

Already, many people in the Mustang World have offered their support to make the museum exactly what Steve and Ron envision. That is,a place where Mustang clubs can come and hold meetings, shows and displays, rally's and events to promote their clubs and the hobby, and most of all, to enjoy their Ford Mustangs. Their vision is for the National Mustang Museum to be the Clubhouse for the Mustang World.  At this point, the museum is in the planning stages and you will be able to see the growth as the building is built and the Mustangs start pouring in! If you are a Mustang enthusiast, the next year is going to be an exciting time for the Mustang World!

Steve and Ron acknowledge that there is very little information about the project posted here and vow to keep everyone informed on the progress as soon as it is possible. All of you who read this are in on the ground floor of the National Mustang Museum. Literally, the "ground" floor as there is no concrete at this time! But, there soon will be!

If you would like to get on the National Mustang Museum's e-mail list and receive updates about the progress and event dates, please sign up below.
www.thenationalmustangmuseum.com

* - Mustang production dates taken from "The Mustang Production Guide", Volume 1, 1964 1\2 -66, by Jim Smart and Jim Haskell, pages 1 and 28. According to the Mustang Production Guide, the 1,000,001 Mustang, a Silver Frost Convertible, was presented to the owner of the #001 production Mustang, Stanley Tucker, on March 2, 1966 at which time he traded #001 back to Ford. The actual one millionth Mustang has not been found as of yet.

Barn Find cars seem to currently be very, very popular. So...here's another one that's been labeled as such. 1966 Shelby SFM6S163 is reported to be a basically unrestored, one owner Shelby that's been sitting for many years.

It's one of the super popular, first 252, Carryover cars.

This particular Shelby is scheduled to be sold at the Bonhams Auction being held in conjunction with the Greenwich Concours D'Elegance on June 5, 2106 in Greenwich, CT. The estimate is $80-120K.

Read more about this car at the Hemmings Motor News Blog  http://blog.hemmings.com/index.php/2016/05/04/unrestored-one-owner-carry-over-1966-shelby-g-t-350-heads-to-auction-in-connecticut/#comments-block

For more information about these unique Carryover '66 Shelbys check out the website www.CarryoverGT350.com

The first 300 or so 65 GT350 Mustangs (Shelbys) were equipped with trunk mounted batteries. We now have the special bolts, nuts, and washers for this application.

Our part number is EG26031. Click here for more information. 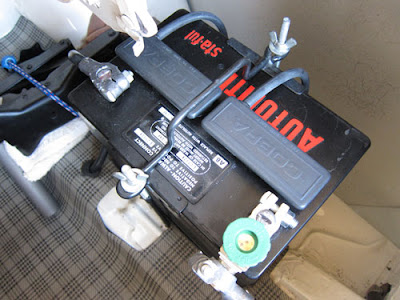 
Today, we have a few more pictures of the 1967 Shelby GT500 that Jeremy at Maple Hill Restoration is working on. Again, this isn't as much of a restoration as a "clean up". It's so nice to see a super original car like this and be able to "save" a lot of the originality.

Check out the latest batch of pictures.