We now have two new GT Emblems for you Mustang. The first one is for the restoration and show car folks. It's a brand new copy of the original 1965 GT Emblem with the proper cloisonné insert.

Then for those who prefer a cool custom touch, we now offer a "reverse color" GT emblem. This nice emblem features a black background with red GT letters.


The assembly of our project 1966 Shelby continues to come together. The interior has been installed now except for the door panels. Those will be left off until we drive the car a bit. We will re-check the window adjustment when we see how much wind noise we have around the roof rail area seal weatherstrip.

This Shelby is '66 #33, so it was the very first batch and came with a rear package tray rather than the folddown rear seat that was used in most '66 GT350s. You will also note the the seat upholstery and dash pad are from the 1965 model Mustang, since these first 252 '66 Shelbys started as '65 Mustangs.

We have posted a lot of pictures today. Check them out and be sure to also scroll down and read the comments about the pictures. If you missed our last post, you can check it out by clicking here.

All of the rear interior trim is now installed. The Shelbys with the rear package trays had a metal cover riveted over the interior rear quarter trim panel where the folding rear seat latch would have been originally installed.

The seats have been completed for quite some time, and now they are in place!

The door panels are going to be installed later. We want to drive the car to check for any wind noise. The windows may have to be re-adjusted a bit.


Here's a shot of the LH under dash area showing the fresh air vent, HiPo choke cable, parking brake mechanism, windshield washer motor, heater plenum, etc. It's great to have all of this finally assembled and in the car.


Special step plate labels with "Shelby American, Inc" and the "CS" logo were originally installed on all of the 1966 Shelbys.


The original rear package tray is back in its permanent home!

Insulation was installed, like originally done, on the back of the kick panels before installation.

The instrument panel and bezel in the Carryover GT350s were the '65 standard interior GT style.

Some of the Carryover '66 cars had the GT 350 tail light panel emblem and some did not.


Trunk area is complete now with the trunk mat installed.

There are actually several variations of the '65-66 Mustang fastback trunk hinge. One of these variations involves the use (or lack of) a bushing where the torsion rod passes through the hinge. You will note that this particular car did not ever use the bushing. The hinges that used the bushing had a larger hole to accommodate a plastic bushing.


The above picture shows the rear trap door latch and striker. A piece of wood was attached to the plastic rear package tray. There is also a wood support on the under side of the tray.

Our one piece cast aluminum Magnum 500 (and Magnum 400 wheels for 6 cylinder equipped Mustangs) have been very popular. There is a wide variety of centers to choose from, and now we also have bolt on spinners.

These "knock-off look" spinners are precision cast and beautifully chrome plated. They come complete with mounting hardware to prevent theft. Two center emblems are included, so use whichever one you prefer. These spinners were a popular accessory in the 1960s and 1970s and look fantastic.

Our part number is HB-22A. Click here for more information. 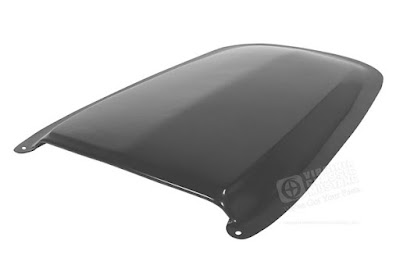 In 1965 and 1966 the Shelby Mustangs came equipped with hoods with scoops. Early in '65, the hoods were all fiberglass, then steel framed hoods with fiberglass skins were used. Due to supply problems, many of the '66 Shelbys came with all steel hoods with steel hood scoops.

We have an original '66 Shelby all steel hood here and compared this scoop to the original. It is very nice!

Our part number is ER-1911 - Click here to order and for more information.


Wow! What great looking wheels! One of our customers recently sent us this picture of his gorgeous 1965 Mustang GT High Performance Fastback with his newly installed Shelby Cragar inspired wheels that he recently purchased here at Virginia Classic Mustang.

These new, improved Mustang outer front bumper arms have been reproduced using original Ford blueprints and NOS samples. Angles, bolt holes, and mounting plates are precisely assembled in fixtures to ensure a fit that requires no modifications. The bolts holes are enlarged slightly in order to fit both original and reproduction bumpers. Finished in semi gloss black.

These new Mustang bumper brackets are currently available for 65-66 and 69-70 models. Arms for 67-68 Mustangs will be available soon.

Click on the links below for more information or to order:


We have another update today on the restoration of 1966 Carryover GT350 Shelby 6S033. Again, it's one of the early '66s that originally started as a '65 model Mustang. As a reminder, you can read more about these cars at www.carryoverGT350.com.

Our last update was just a week ago, but if you missed it, click here.

The original quarter window moldings were sent out to be anodized. They came back looking fantastic...very pleased with the results! The original plexiglas was sanded and polished, so it was re-used.
The "wrapping" on the rear brake lines was originally found on 6S033. At first, it was thought to be something a previous owner added. We then discovered that most carryover Shelbys had this feature. Apparently, it was added so the metal brake line would not rub against the traction bar bracket that was welded to the rear end housing.

The routing of the rear parking brake cable is unique to the late '65 production Mustangs. The attaching clips are also unique to this production time.

The above shot shows the back of the front valance and the LH parking light.

Except for some very minor details, the engine compartment is ready to go.

The original side scoops required a bit of work, but they were restored and re-used.

Most of the remaining photos show the trunk area. It's now ready for the jute sound deadener that was originally installed on top of the gas tank, the trunk mat, and then the mounting of the spare wheel and tire.