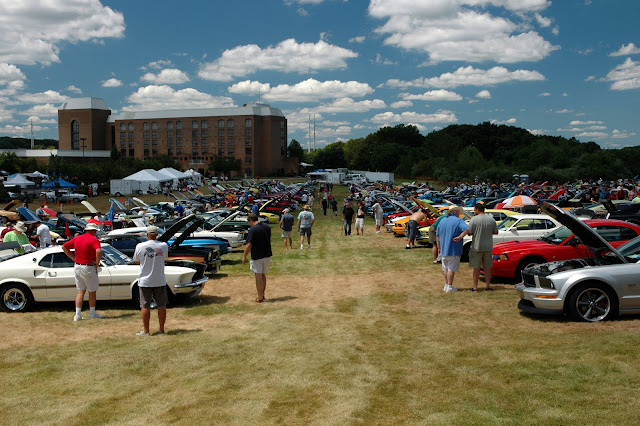 We want to thank Deborah Monbeck for these great pictures from the Mustang Club of America (MCA) show held July 20-22, 2012 in Warwick, RI.  Enjoy!

Please note:  If you received this Blog post via email, please go directly to the Blog post to view the slideshow images.  This is a Flash based slide show, so it cannot be viewed on an iPad.


There were tons of production changes on the '64 1/2-66 model (and later) Mustangs.  One of them involved the quarter panel extension end caps.  Starting sometime in late '65 production, these quarter extensions were made with a groove in them to accommodate a rubber seal.  The earlier cars simply did not have this groove and did not use the rubber piece.

We can only assume that this change was made perhaps due to some time of problem with this piece fitting right against the quarter panel.  San Jose produced Mustangs that I have seen have these "early" quarter extensions right through June of '65 production.  I don't think it is usual to even find one early and one late originally installed on the same Mustang in this production time period.

Keep in mind that even though the later cars use the seal, the seal is not seen once the quarter extension is installed on the Mustang.

We have gotten quite a few requests from the 1966 GT350 Shelby guys about the radiator tags.  We now keep these in stock.  Our part number is EG-2596.

These tags are for the V8 radiators originally installed in Mustangs built at the San Jose Ford plant.  The "G2" number is always found on the 4 speed equipped GT350's, and it is possible that those designated radiators may have been used in some other manual transmission equipped Mustangs.

It is also interesting to note that this tag was not used on radiators until around the 10 65 date stamped ones. Ones stamped before this time had the C4ZE G2 number stamped into the tank itself as shown in the picture below.

The 1964 1/2 and 1965 Mustangs used sort of a "smooth" or Sierra grained windlace.  On most '66 Mustangs, you will find that the windlace was of a different design or texture.  I've always called it a "basketweave" design, but if you look closely, it is just a unique pattern.

Anyway, this windlace has never been available in an exact reproduction before now.  It is certainly a very nice detail to add to any '66.  With my personal interest in the early '65-66 GT350 Shelby Mustangs, I almost always see restored '66 Shelbys with the incorrect windlace.

I'm looking for any feedback from 1967 and up Mustang owners, because this style of windlace was probably used in these models, depending on the production plant and production time.

This windlace features a steel core for easy installation, just like the original.  There are 16 feet required on Fastback and Coupe Mustangs and 8 feet for Convertibles.  It is currently available only in Black.  Our part number is ST-410BLK.


This is a cool part that just arrived to our store.  This is the seat track adjuster for the 1965-70 Mustang Front Seat.  There is one of these per front seat.  If you have ever had a damaged or missing one of these, you know how difficult it can be to find one.  Now you can order brand new ones!!


If you are a regular reader of our Blog, you know that the beautiful work done on our cars featured here is performed by Jeremy Turner at Maple Hill Restoration.  Jeremy has been working on a web site showcasing some of his services and his shop.  The site is finally up and is now available for viewing.  Take a look, when you get a chance!


We have seen so many of the Mustang rear leaf spring / rear shock mounting plates that are heavily pitted, bent, or cut.  We have great looking reproductions of these plates for both the 65-66 model Mustangs and the 67-70 Mustangs.

They are very heavy stamped steel parts like the originals.  Here are the part numbers with links:


Everyone always posts pictures of V8 Mustang Rear End Housings and Center Sections being restored.  Today, we have one out of a 1965 Mustang Six Cylinder Model.  This is from a Mustang convertible that Jeremy Turner at Maple Hill Restoration is restoring.  It is his own personal car and will be quite unique with a 4 Speed Dagenham Transmission, Air Conditioning and Rally Pac.  Jeremy's web site is still being built and refined, but you can now learn more about his restoration work at his new site - www.MapleHillResto.com.

Anyway, the rear end housing here is far from complete, but I definitely thought it was worth a look so far.  I think it looks great!  The level of detail here is seldom seen, particularly on a six cylinder Mustang.  I'll have a follow-up post once it is completely together.  There were lots of original paint markings on this particular piece that will also be duplicated.

This project has been on the back burner since we started preparing our '65 GT350 for the Concours Show at SAAC-37 in Watkins Glen.  Now that is over, we are starting again on this project.  All work is being performed by Jeremy Turner at Maple Hill Restoration.  Jeremy did the work on the '65 and also the HiPo convertible that was featured here in lots of posts.  Jeremy expects to have a web site of his own soon, and we will let you know when that is completed.

In this post, we are going to show you the work on the RH door as the body is prepared.


Our goal with the entire car, just as it is with all our projects, is to restore the car authentically, and to go that
"extra mile" by extensively preparing the body and parts under the final finish.  The door here is a good example.


We were lucky to have a rust free, original door.  It was not perfect though, and Jeremy first stripped it inside and out by glass beading it.  He then fixed the minor dents.  The inside was epoxy primed to duplicate the original red primer.  After the outside and interior part was also epoxy primed, the black interior surface was also primed in black.  Then the white overspray, like original, was applied to the area under the door panel and the inside of the door.

The entire door was loaded with parts for alignment to the car before this process, and it will be done again before the final overall fitment for the final bodywork on the entire car.  Watch our Blog for lots more information on this project as it progresses.


We always love to feature customer cars here on our Virginia Classic Mustang Blog.  Today, we have a couple of cars owned by Geary Hoover.  The '73 Mach 1 features the 351C Ram Air Engine option.  It was originally purchased by Vic Edelbrock.

Geary's 1966 Convertible is a six cylinder model with the rare 4 speed transmission.  It has been featured in some calendars, poster and magazine.