After being out of stock for some time, we now have the 69-70 Mustang Radio Knob Sets in stock again.  These knobs are made in the USA and are of super quality.  They are plastic, like the originals, and feature the exact correct details along with the detailed black paint.


It is frustrating when you are trying to install a new part on your Mustang, and you do not have the proper hardware.  We are adding new items all of the time, and the latest are hardware kits to install the clutch equalizer bar mounting brackets.


If you have been following our "detailing" project of our '65 Shelby, we just have a small update today with a few pictures.  The drivetrain is now installed, and it is running again.  The original aluminum case T10M close ratio 4 speed transmission was freshened up along with the engine.  The transmission was not bad, but it just did not shift into second gear like it should.  The engine was removed for detailing, and we went ahead and put in new rings and bearings while it was apart.

The front end sheet metal and hood will be reinstalled soon, and we should be ready for SAAC-37 at Watkins Glen.

Email ThisBlogThis!Share to TwitterShare to FacebookShare to Pinterest
Labels: gt 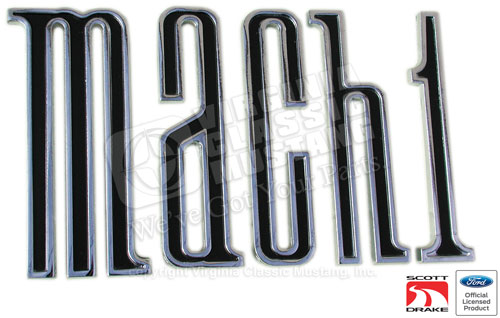 We have exact reproductions of the original '70 Mustang Mach 1 Trunk Letter Sets.  These letters are pressure die cast zinc and made just like the originals.  They feature beautiful chrome plating with the correct black painted details and have a 3M™ adhesive backing.  Equally important, they also have the correct contour for the proper fit on the trunk lid.  This is a feature missing from other reproductions.

Our part number is ER-233.  It is another great part made by Scott Drake Mustang Parts.

I love old photos of cars, and I thought that I would share one that was recently sent to me.  There are a  few 66 GT350 Mustangs listed in the SAAC Shelby Registry as being originally leased by James McLean, Vice President and General Manager of Shelby American.


I stay in contact with one of James' sons, Bill.   Bill was the first "driver" of a car I have-6S033.   Bill worked at Shelby American for a time also. After he turned in that car, he drove 6S296. His sister, Sue got 6S298. This car is unique in that it was originally blue with a blue interior.  Yes, a blue interior!  Bill tells me that this photo was taken in front of their house in Palm Springs. The two kids are Bill's nephews-check out that kid's sized Shelby American shirt!! The car was drag raced by his sister and her boyfriend quite often.

LOS ANGELES– May 11,2012 – Carroll Shelby International, Inc., (OTC: CSBI.PK) announced today that Carroll Hall Shelby, a man whose vision for performance transformed the automobile industry, has died at age 89.   Mr. Shelby passed away yesterday at Baylor Hospital in Dallas. The cause of death was not disclosed.

Born on Jan. 11, 1923, Carroll Shelby was one of America’s greatest success stories.  Championship-winning racecar driver, “flying sergeant” wartime pilot, philanthropist, entrepreneur, car manufacturer and racing team owner, he embodied the ingenuity, tenacity and grit to overcome any obstacle.  He is perhaps the only person to have worked at a visible level with all three major American automobile manufacturers.
Carroll Shelby founded Carroll Shelby International, a publicly held corporation involved in many industries.  His licensing arm has agreements with industry giants, such as Mattel, Sony, Ford Motor Company and Electronic Arts.  His car company, Shelby American, has a thriving parts business as well as a line of muscle cars including the Shelby GT500 Super Snake, Shelby GT350 and Shelby GTS.  The Las Vegas-based company also manufactures a limited number of the 1960s Shelby 289 “street,” 289 FIA, 427 S/C and Daytona Coupe Cobras.

Shelby considered his greatest achievement to be the establishment of the Carroll Shelby Foundation™.  Createdin 1992 while Shelby was waiting for a heart transplant, the charity is dedicated to providing medical assistance for those in need, including children, educational opportunities for young people through automotive and other training programsandbenefitting the Carroll Shelby Automotive Foundation.

Shelby remained active in the management of each of his companies and the Foundation until his death, even though he endured both heart and kidney transplants in the last two decades of his life.

“We are all deeply saddened, and feel a tremendous sense of loss for Carroll’s family, ourselves and the entire automotive industry,” said Joe Conway, president of Carroll Shelby International, Inc. and board member.  “There has been no one like Carroll Shelby and never will be.  However, we promised Carroll we would carry on, and he put the team, the products and the vision in place to do just that.”

Shelby is survived by his three children Patrick, Michael and Sharon, his sister Anne Shelby Ellison of Fort Worth and his wife Cleo.  Funeral plans are not currently available.  Donations to the Carroll Shelby Foundation are encouraged in lieu of flowers.  Information about the Carroll Shelby Foundation is available at www.carrollshelbyfoundation.org.

Jeremy at Maple Hill Restoration has just finished up the painting and assembly of the 289 High Performance Engine to go back in our 1965 GT350 Mustang.  We decided to put all of the parts on it for a little photo shoot.

Some of our readers here may know, but for those who do not, the engine in the 65-66 GT350's was the 289 K HiPo Engine.  Additional items were added when the car was modified at Shelby American.  These items included a High Rise "Cobra" Intake Manifold, a 715 cfm Holley Carb., "open letter" Buddy Bar Cobra Aluminum Valve Covers, Tri-Y Headers, and the Cobra Cast Aluminum Oil Pan.

The 289 HiPo engine came with the wide style harmonic balancer as pictured.  This one is dated "A5" - January 1965.
The fan blade was also unique to the 289 HiPo Engine.  These were date stamped also.  This particular fan is stamped "A65" for January 1965.


All of the original HiPo fan mounting bolts that I have seen have had this "flag" headmarking.

The GT350 Mustang had a unique PCV Valve hose.  The metal hex style PCV Valve was the style used on all of those model 65-66 Mustangs.

Here is a new item that just became available.  It is a little part, but when you are looking for one, it is extremely difficult to find.  It is the cup washer that fits at the end of the front parking brake cable at the spring for a 1969-73 Mustang.

This cup washer was reproduced from the original Ford Blue Prints and is just like the original.  It features nice clear zinc (silver) plating.