Back in the early '60's, Ford Motor Company considered producing two seater Mustangs.  Obviously, a different route was finally chosen, but this "shorty" Mustang was designed by Vince Gardner and built in 1964 by Dearborn Steel Tubing.  DST still builds and maintains many Ford prototype, concept, and show vehicles.

This "shorty" Mustang was taken on tour and Bill Snyder of Hudson, OH saw it and just had to have it.  It obviously wasn't for sale at that time.  Through a bizarre series of events though, Mr. Snyder actually ended up owning the car several years later.  It has recently been restored and made its debut at the 2013 Amelia Island Concours d'Elegance in Florida.

Check out more details of the story here. 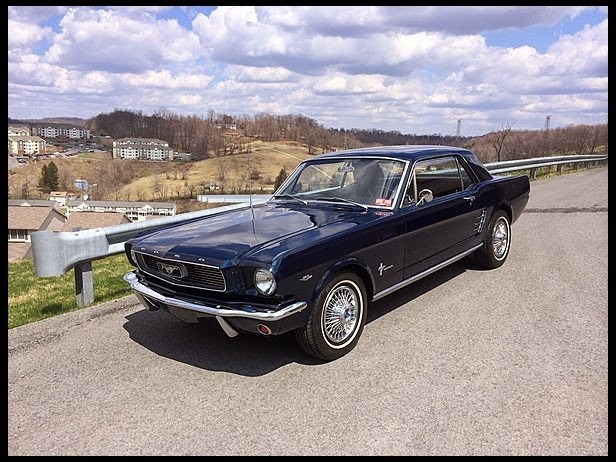 Mecum Auctions held an auction in Harrisburg PA this past weekend.  Classic Mustangs were well represented.  In today's Blog post, we have a few examples.  We will start with the above 1966 Mustang Coupe with a 4 speed transmission.  It was sold for $21K. 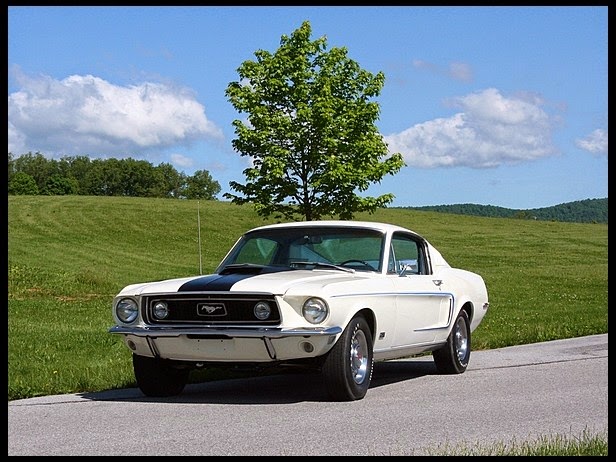 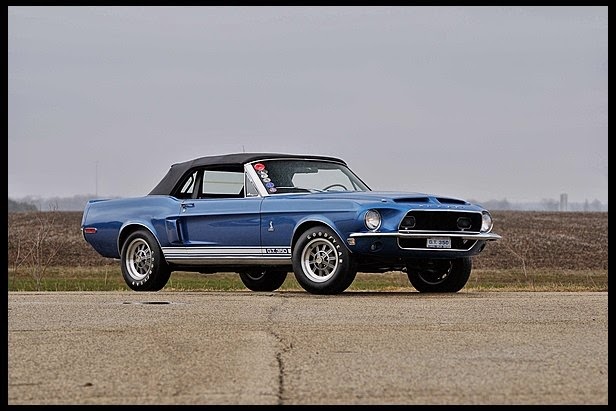 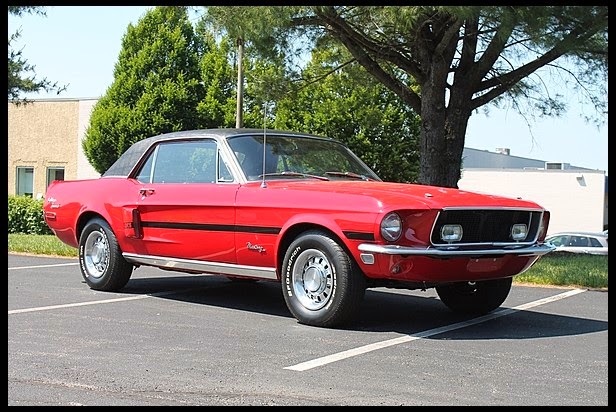 How about a '68 California Special Mustang for $33K? 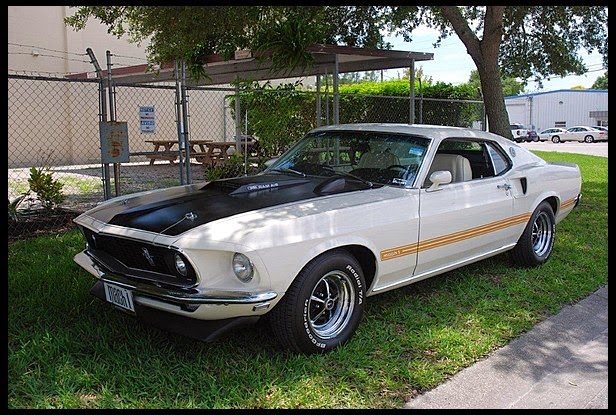 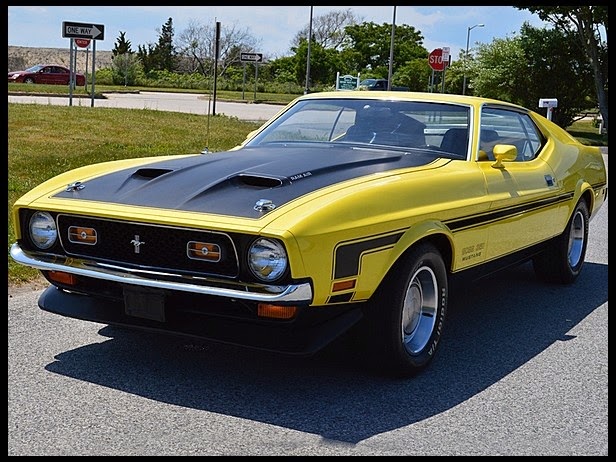 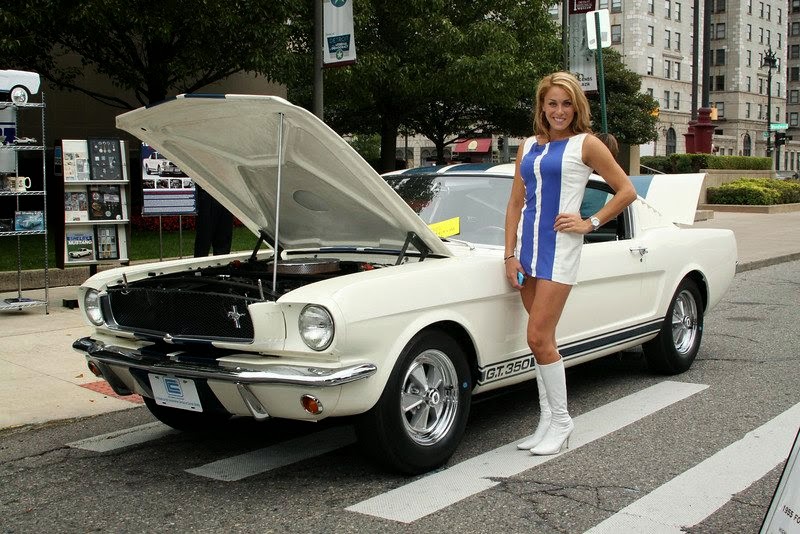 These photos were posted to our Virginia Classic Mustang Facebook page.  Just in case you don't do the Facebook thing, we thought we would share them here! 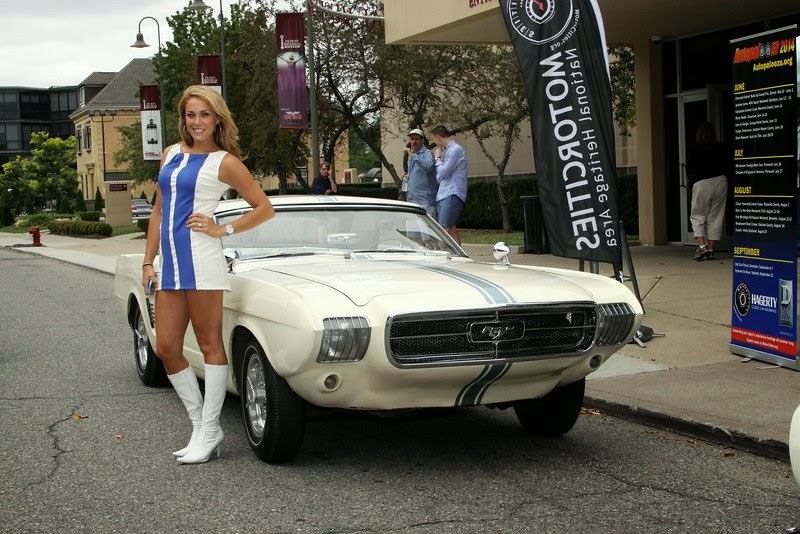 The above car is the 1963 Mustang II Prototype.  You can read more about this car here:  http://www.mustangandfords.com/featured-vehicles/mump-1212-up-close-1963-mustang-2-prototype/ 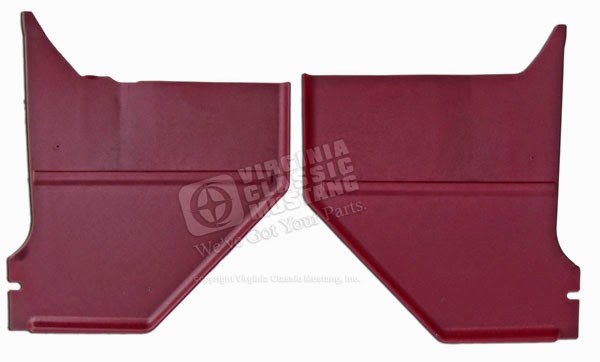 We now have our Exact Show Quality Kick Panels available molded in '66 Red (Maroon) for 1966 Mustang Coupes and Fastbacks.  These kick panels feature the correct contours, texture, grain, and thickness as the originals.

Screw holes are also reinforced just like the originals.

These kick panels are also available in other body styles and colors.  Here is the complete list:

Don't forget that we also have nice more economically priced kick panels available in a wider variety of molded colors. 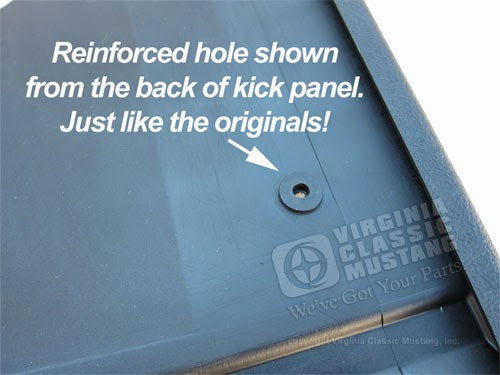 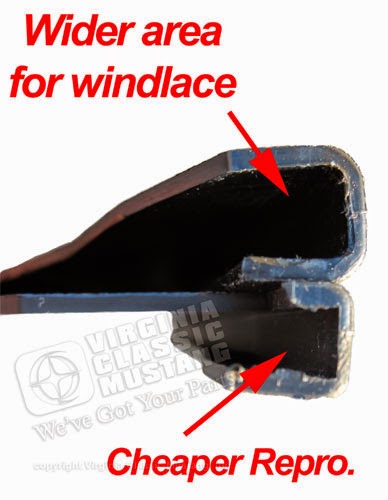 We now have the '65 and '66 Mustang Hood Latch Pin with the correct yellow / gold zinc finish on the pin with a phosphate coated nut and washer.  This is correct for the show / concours Mustang.  Our part number for this new Mustang Part is EG-6242.

For a custom look, we also have this part in polished stainless steel (EG-6241) - looks like chrome but won't rust! 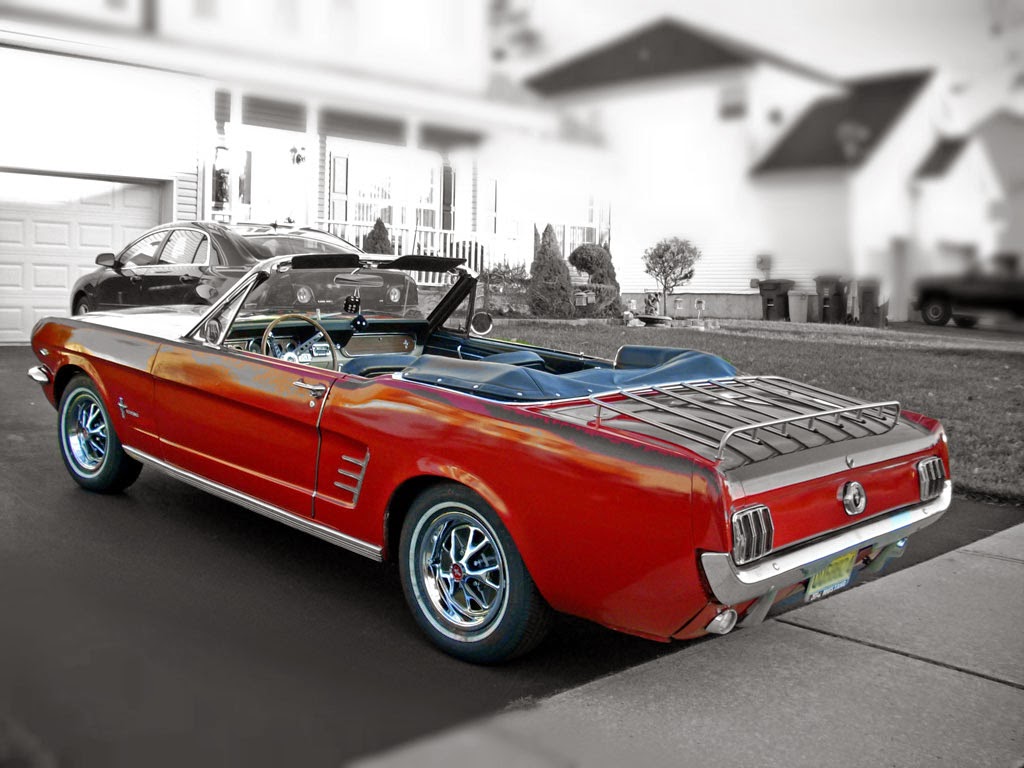 We love to feature customer cars on our Virginia Classic Mustang Blog.  Our last post prompted some more pictures, so here is another beautiful 1966 Mustang Convertible owned by one of our customers.  Enjoy! 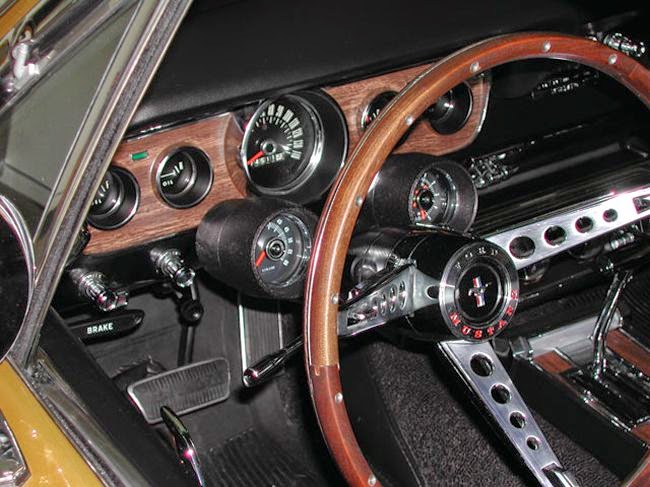 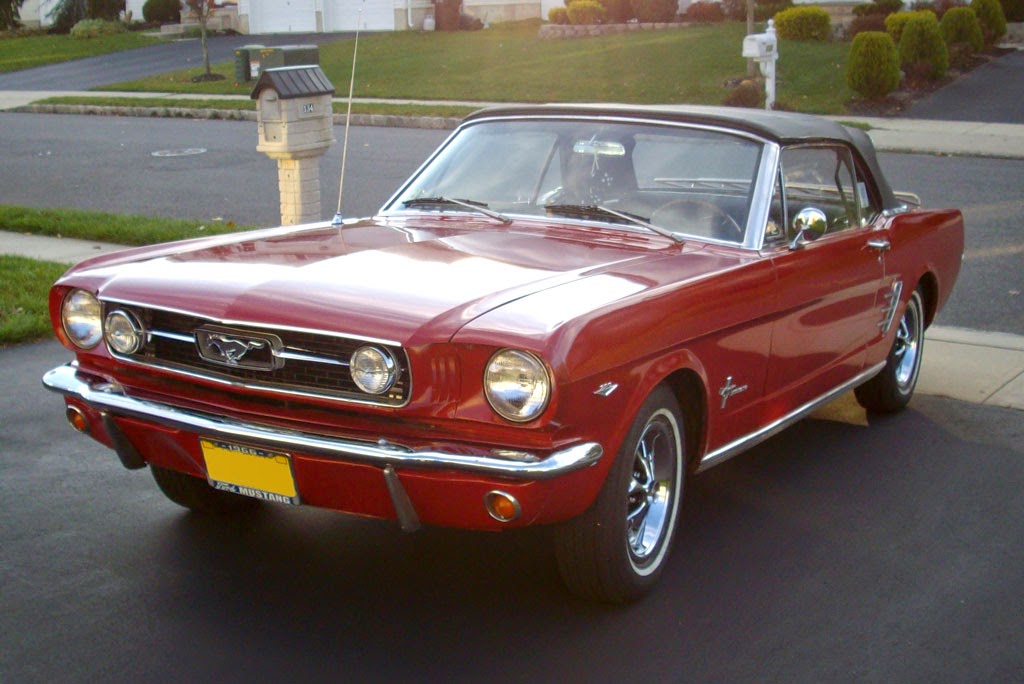 We always love to feature Customer Mustangs here on our Virginia Classic Mustang Blog.  If you have any pictures of your car to share, send them our way!  Here is our latest feature!  Check out this nice 1966 Mustang Convertible!

I have a 66 Mustang 6 cylinder convertible that I am very proud of and would like to share with you. The car started out as a complete "rust bucket" and after 2 yrs I have turned it to a 100% concours restoration that has the car looking exactly like it did on a Ford dealers showroom in 1966. I started the restoration in 2011 and finished it in August of 2013. . The final body prep and paint, were done by a local Ford dealer, and I had the cloth top put on, all the rest of the restoration was done by me.The car has won first place at all the shows it was entered in. It took Gold at a recent MCA National event, and First Prize at the AACA Nationals. It has been featured on the Powernation TV series hosted by Courtney Hanson, and will be featured in an upcoming issue of Mustang Times.
I have a facebook page which is a photographic journal of the restoration of the car and her continuing adventures: https://www.facebook.com/pages/The-rebirth-of-a-1966-mustang-convertible/273058209432439#

Yesterday, there was an event at the Simeone Automotive Museum in Philadelphia, PA celebrating the 50th Anniversary of the Mustang.  Some special cars were displayed.  This information was shared on the Simeone Automotive Museum's Facebook page.  The exhibit will run from July 12-27, 2014.  Visit their website here:  http://simeonemuseum.org/events/50-years-of-mustang-show

Celebrating the 50th Anniversary of the Ford Mustang, the development of the Mustang as a racer was discussed by Chuck Cantwell, the “Father of the GT350 and Greg Kolasa, author of The Definitive Shelby Mustang Guide: 1965-1970. Joined on the stage was Joe Spinelli, who discussed the Mustangs contribution to Drag Racing.Photos by Andrew Taylor

Check out some of these vintage Mustang advertisements from the '60's.  Pretty cool, huh?

Links to this post
Email ThisBlogThis!Share to TwitterShare to FacebookShare to Pinterest
Labels: Mustang and Shelby Memorabilia, Vintage Mustang Ads 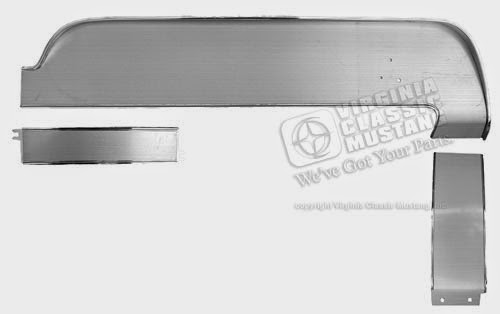 We just wanted to pass on a price decrease that we recently made.  Our 1967 Mustang Instrument Panel Trim Set has decreased in price from $149.95 per set to only $99.95 per set.

The set still includes the same chrome plastic trim dash panels (Upper RH, Center, and Lower RH) with real brushed aluminum attached.  It's the same quality product.  The manufacturer has just lowered our cost, so we are passing it along!

Also check out our matching '67 Mustang Instrument Bezel with the real aluminum panel insert.  It also dropped in price months ago!


Our 1968-70 Mustang Seat Hinge Covers are available molded in Black plastic or a Neutral color plastic. One set will do both front seats.  They even feature the correct grain!

The Neutral color ones are perfect for painting to match your interior color.  Regular interior paint will work fine on this hard plastic material. 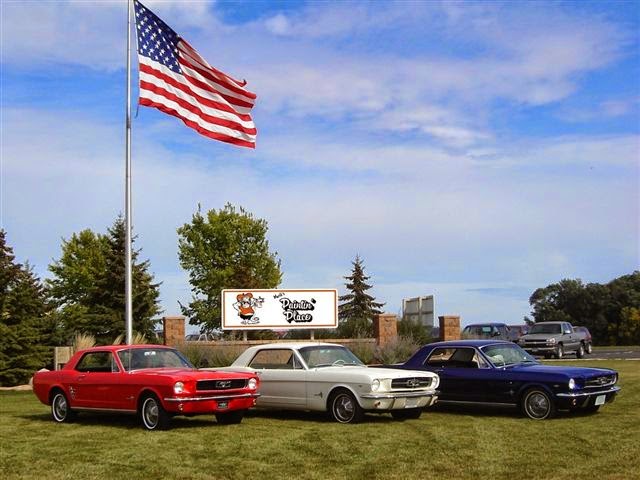 We want to thank our customer, Dennis Macik at Macik's Paintin' Place for sending us this patriotic Mustang picture!


Just in!  This brand new Leather Key Fob is really nice!  At 3 3/4 inches high by 1 3/4 inches wide, it is a bit bigger than the old traditional key fobs that we carried back in the 1980's.  That alone makes it really nice. This key fob also features an embossed aluminum stick on emblem.  The emblem is of a very high quality with a blue background and the traditional tri-bar red, white, and blue Mustang Running Horse emblem.

Since the logo is embossed, it "stands out" on the aluminum disc for a great detailed look.  The disc also features 3M peel off adhesive to stay put!