As the 50th Anniversary of the Ford Mustang approaches, Ford Motor Company has been posting some items from their archives.  Today, we'll take a look at some of the advertising from the 1960s.

The Mustang could be purchased in a variety of different configurations from an economical six cylinder 3 speed coupe to a well equipped ride with air conditioning, power steering, automatic transmission, etc. to a 289 High Performance 4 speed equipped car.  So...the Mustang could be really personalized for each individual.  Ford recognized this and created ads similarly personalized to different customers.

Links to this post
Email ThisBlogThis!Share to TwitterShare to FacebookShare to Pinterest
Labels: Mustang 50th Anniversary, Mustang and Shelby Memorabilia


The 1965 and 1966 Shelby Mustang GT350's were available with optional wheels.  In 1965 and early 1966, the optional wheel was a 15 inch aluminum center wheel with a steel chrome rim that was made specially for Shelby by Cragar.  A bit later in the 1966 production, a 14 inch optional aluminum wheel, commonly referred to as a "Ten Spoke" was made available.

Both of these optional wheels used 7/8 inch lug nuts as opposed to the stock 13/16 inch size.  A special lug wrench was designed with a 7/8 inch socket to be added in the trunk of the Shelbys equipped with the optional wheels.

These lug wrenches were reproduced from the original drawings about 30 years ago.  Originals and the first run reproductions have been very difficult to find in the last few years.

Another very limited run was recently made, and we just received some.  More than likely, these will not be run again.

They are available on our web site as part number ST-1791.  Click on the link or any of the pictures to order.  You can also order by just giving us a call.

This is one of those "geeky" posts about some details that perhaps some folks may not be interested in.  If you like original Mustang and Shelby details though, you may want to read on!

Anyway, those orange/red Koni Shocks are, of course, closely associated with the early model Shelby Mustangs.  The Koni's were originally installed on all of the 1965 GT350s and the early 1966's also.  Later in '66 the Koni shocks were replaced by another adjustable shock apparently manufactured by Gabriel.

We just purchased 1966 Shelby 6S1732, and we were lucky to get several boxes with most all of the parts that were ever replaced on the car.  One of the boxes included the two front original shocks.

As you can see, they are stamped with some numbers, a FoMoCo logo and a date code.  They still wear some of their original blue paint.

The rears are missing.  If anyone has any for sale, please let us know!

The celebration of 50 years of Ford Mustang will be so large Ford Motor Company and the Mustang Club of America plan to simultaneously hold it at two locations from April 16 through April 20, 2014. Open to everyone, not just Mustang owners and MCA members, the event will be held at Charlotte Motor Speedway in Concord, N.C. and at Las Vegas Motor Speedway in Las Vegas.
“Working closely with Ford, we want to make the official Mustang 50-Year celebration the most important car event of 2014,” said Ronald D. Bramlett, Mustang Club of America executive director of the Mustang 50th Birthday Celebration. “We hope everyone who loves this iconic car will join us to share their personal Mustang story.
“Whether you love modern or vintage Mustangs, Shelby or Boss, racing or cruising, a new fan or have been enjoying the lifestyle for years, we’ll have something memorable for everyone at both locations.”
Charlotte Motor Speedway and Las Vegas Motor Speedway, two of the most prestigious racetracks in the United States, are positioned to allow the maximum number of enthusiasts worldwide to attend the Mustang 50th Birthday Celebration. MCA will also organize “Pony Drives” so Mustang owners can travel in an organized group to each venue.
“Mustang enthusiasts are among the most passionate fans in the world,” said Steven Ling, Ford car marketing manager. “These twin events are really for them. We’re proud to be part of this celebration of a car that’s often called the soul of Ford Motor Company.
“Everyone has a Mustang story, and we will give people a forum to express those stories with others who also love this car.”
The original American pony car has been extremely successful for Ford, with more than 9 million sold throughout its lifetime. A key aspect to its success is that the car has always been offered in a variety of configurations, appealing to a wide variety of people.
“One of the highlights at both venues will be a display featuring examples from each of the first 50 model years of Mustang,” said Bramlett. “We’ll include cars released in April 1964 to the latest models out of Flat Rock Assembly Plant.”
Since the Ford Mustang was launched at the 1964 World’s Fair in New York, it has become an important part of pop culture. Mustang has more than 3,000 appearances in film and television, plus hundreds of musical references. With nearly 5.5 million fans, Mustang is the world’s most popular automotive nameplate on Facebook.
Always evolving, each new model year of Ford Mustang has been embraced over the decades, offerings people a way to express themselves. Mustang has been a canvas for personalization. From 600-horsepower-plus versions that can exceed 200 mph to the most affordable models that get more than 30 mpg and deliver more than 300 horsepower, Mustang’s universal appeal has made it a symbol of Americana.
Twin celebrationsThe tentative schedule for both venues is:
Details are being formalized for the event. Information will be continuously updated on a special website,http://www.mustang50thbirthdaycelebration.com/ and at the MCA website, http://www.mustang.org/.

Here is the latest addition to the corral.  It's a 1966 Shelby.  We recently picked the car up in Missouri.  It was a long trip from Virginia, but I had some great help from two of my friends.  One being Jeremy from Maple Hill Restoration.

This car is a great, original driver as is, but we have some "tweaking" and cleaning planned for it soon, and, of course Jeremy will be handling that.

This Shelby has been owned by the same individual since 1972!  The car was purchased by him at that time, and he immediately started his career in the military.  The Shelby was properly stored for 30 years until he returned home and had more time to get it going again.  Over the past few years, he performed general maintenance while saving every single part he removed.  It's a great rust free car and will make a super original driver.  The owner was, of course, somewhat sad to see it go, but excited to see it go to a good home.  He is a great guy, and we are looking forward to sending him pictures as we "tweak" the Shelby.

With only 82K original miles, almost every single original part is on or with the car including the engine, carburetor, radiator, aluminum Cobra engine pieces, transmission, fuel pump, water pump, Ray Brown seat belts, Cobra tach, front adjustable shocks, painted Magnum 500 wheels, etc.  Those parts that were replaced will be removed and replaced again with the saved, refurbished, original pieces.

Stay tuned for more pictures in the coming months.

We have a nice selection of metal Mustang and Shelby signs and these are our two newest ones.  Like our other signs, these two new Shelby related signs measure 11 inches x 17 inches and are printed on 24 gauge powder coated metal.  There are pre-punched mounting holes in each corner making it easy to hang.
The images are embedded on the surface in vibrant color.  Click on either image or one of the links below for the price and more information.

We now have the Floor Pan Reinforcement Pan Plates for 1965, 1966, and 1967-69 Mustangs.  These floor pan pieces were spot welded on the floor pan under the rear seats on car equipped with factory dual exhaust systems.  We have previously offered the pans for 1965 and 1966 models, and now they are available for 1967-69 Mustangs also.

We always like to receive images and nice comments from our customers.  Here are some recent photos of a good customer's 1965 Mustang Fastback.

Honestly, this is not a new book at all.  It's just new to our line of products.  We are very happy to be able to make it available to you again.  It's the Mustang and Ford Small Block V8 book by Bob Mannel.

This is the absolute ultimate reference book for 221, 260, 289, 289 HiPo, and 302 engines.  Here at Virginia Classic Mustang, we refer to this book on an almost daily basis in order to answer questions for customers.

Here are a few examples:
What do those numbers on your 289 engine tag mean?
When did the transition take place from the aluminum water pump to the cast iron water pump?
Where can I find the casting number (and what does it mean) on my engine block?
Which is the correct water pump pulley for my car's engine?
Which water temperature sending unit was originally used in my 1964 1/2 Mustang?

These are just a few examples of questions that can be answered.  There are over 2850 great photos, 725 pages, countless charts and diagrams, and tons of other information that is absolutely invaluable if you are "into" the 64 1/2-69 Mustang and other early Fords with the small block engine.  The accuracy and amount of work that went into this book is phenomenal!!

Click on any of the pictures or the part number LT-91 to order.


The 1965 and early 1966 GT350 Mustang Shelbys received Koni shocks as part of the "Shelby Conversion" at Shelby American.  It was quickly discovered by Shelby that a longer bolt and bigger bolt head would work much better for the top mounting of the front Koni shocks.

A rather unique looking bolt was used, and we now have it available as a reproduction.  They are sold in sets of 4 to mount the tops of both front shocks.  They are the original size - 5/16 inch - 24 x 1.60 inch long and feature the correct, unique 9/16 inch hex head with slight dome.  The tip of the bolt is an unthreaded bull nose like the original.  These bolts also come with a separate star washer and feature a silver cadmium plated finish, again, just like the originals. 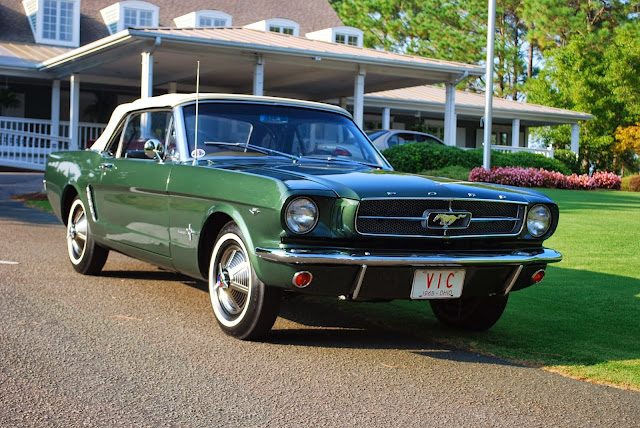 Please check out Barry and Vickie Piersol's final post on their Blog outlining the history, passion and restoration of their 1965 Mustang Convertible.

We now have the 65-73 Mustang Rear End Vent Hose with the correct ribs. This hose fits on rear end vent screw in nipple and runs to the floor pan.  The hose features the correct thickness, durometer and ribbed outer wall.  It's 17.25 inches long and made in the USA.

Our part number for the hose only is EG-553.

We also have a hose kit for the 65-70 (our part number EG-554) which includes the above hose, clamp for vent, clamp for floor pan, screw for clamp, and rubber grommet for floor pan.