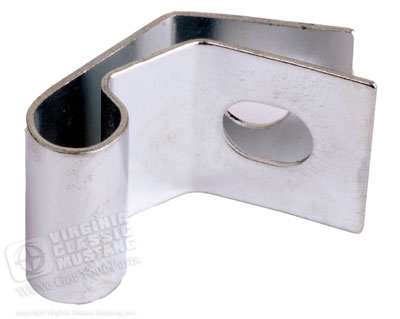 We have been selling Classic Mustang Parts for 30 years, and we are always pleased that so many new parts continue to become available for these cool cars!  As the level of the quality of restorations continue to rise, more and more little detail items come out.

Here is one of those items.  It is the little speedometer cable retaining clip that fits on the firewall of 67-70 Mustangs equipped with a Four Spd. transmission.  It is an exact copy made from the original Ford blue prints.  Our part number is IN-8922.

We have a complete line of Mustang Speedometer Cables available also.  Click here to see them all.

Here is a little, but much needed, part that we just got in.  It is the 69-70 Mustang Air Vent Inlet Gasket Set that go behind the kick panel and seal between the vent and the body.  Our part number is IN-5554, and they are sold as a pair. 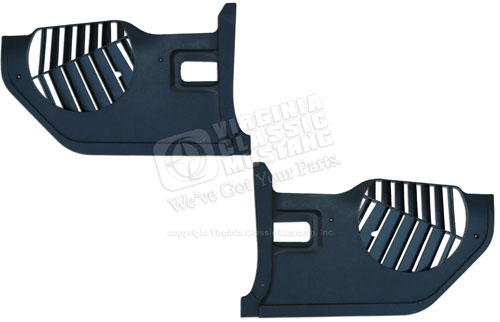 Don't forget that we also have super nice Kick Panels for 1969 and 1970 Mustangs.  These are available in black as part number ST-971BLK.

We used to sell a lot of these Emergency Brake Cable Springs for the Mustangs, but they have not been available for quite some time.  We still get quite a few calls for them, and we are proud to announce that they are available again!

These Mustang Parking Brake Lever Return Springs return the pedal back to the non park position. Originals are often rusty and break. These are made from the original Ford blue prints to the exact original specifications. Finished in black to prevent rusting.

In our last post, we wrote about and shared a video of the NE Regional Shelby American Automobile Club meet that was held in Hershey, PA.  Today, we have a few pictures from the event. 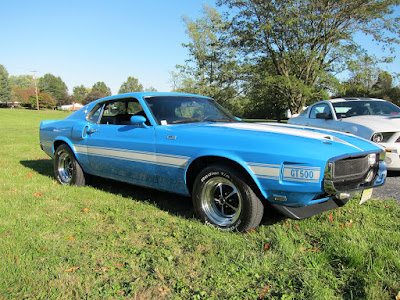 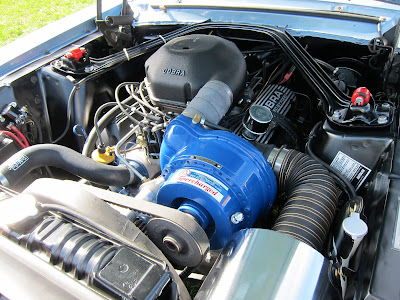 This past weekend, we attended the SAAC (Shelby American Automobile Club) Northeast Regional Meet.  This was the first meet of its kind, and everyone involved with the planning and management of this event just did a fantastic job!  There were many favorable comments as everyone seemed to really enjoy the activities.

Speaking of activities, we had a full slate from the time we arrived on Friday afternoon until we packed up and left on Sunday afternoon.

Our video below gives just a quick overview of the entire event.  There was a super Friday evening "social" from 7:00 PM until around 10:00 PM.  There were various tables set up, and we were one of the participants that displayed a few items.  It was just a lot of fun and "car talk."

On Saturday morning, the same room was set up with a great breakfast buffet.  After breakfast, we headed to the parking lot for a 120 mile road tour with about 60 cars.  It was great to see that the majority of cars consisted of the more vintage variety, rather than a ton of late model Mustangs and Shelbys.  We had at least one of each year Shelby Mustang represented along with other cool cars including a Tiger, a Ford GT, and a Boss 302.

The tour ended at the Bill Collins' Collector Fords.  Wow!  Bill just went out of his way to share his shop, let us look at some cool parts and cars, and provide us with an incredible lunch!  Everyone has been raving about Bill's hospitality.

A banquet was held Saturday evening with more great food, entertaining speakers, and both old and new friends.

Everyone headed to the AACA (Antique Automobile Club of America) Museum on Sunday morning for the popular vote car show.  The show was also well organized and well attended.  There were eight 1965 GT350 Mustangs in attendance!!!  There were even more '66 models.  To see that many '65's and '66's at one place was just really cool!  There were many, many other great cars too including a 427 SC Cobra and a super nice 289.

Everyone that I have spoken to, including me, hopes this becomes an annual event.  If you missed it this year, make sure that you do not miss it next year.

We just have a quick post today about another new part.

These are the 1967-73 Mustang Lower Suspension Ball Joint Seal Retainer and Gasket. These parts are for use when rebuilding the lower control arms for concourse detailing or when replacing the ball joint seal. These are the two parts that always need to be replaced. Exact reproduction of the original with zinc plating on the retainer. 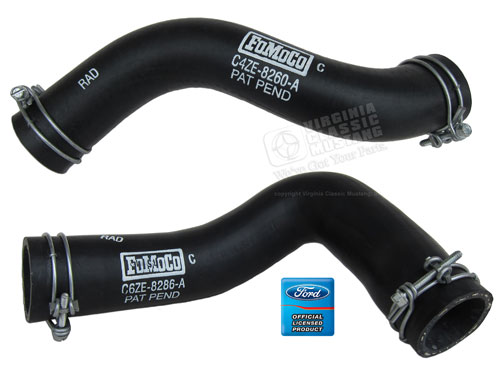 We have a complete line of FoMoCo and Autolite stamped Radiator Hoses for most model years of Mustangs.  You can see them all by clicking here.

A special experiment began for the 1966 model year at Ford Motor Company. A test was underway to determine if a new assembly line method would help speed up production. This test, at the Dearborn and San Jose assembly plants consisted of attaching clamps to the radiator hoses to save the assemblers time. Note the "Pat Pend" stamp on the hoses. Virtually all mid to late production Shelby GT350s should have this style of hose, along with most other 289 Mustangs. 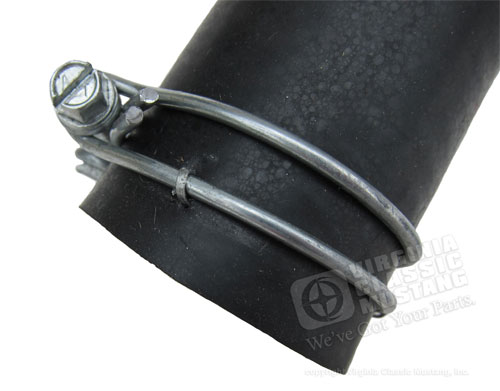 These radiator hoses are made by an original OEM manufacturer to the latest SAE standards. They feature correct bends. The hoses have the original double-wire clamps stapled to the hose with the correct orientation as was done on original assembly line hoses. These are the only hoses with this feature. The logo and part number stamped on the hose are the correct ones. The part numbers and logo are printed with the correct font size and style to match the originals exactly. Do not clean hoses with Armor-All or other products that contain solvent. We recommend cleaning by using a very dilute soapy water solution on a damp cloth with very light pressure.

Heater Cores for your Classic Mustang! 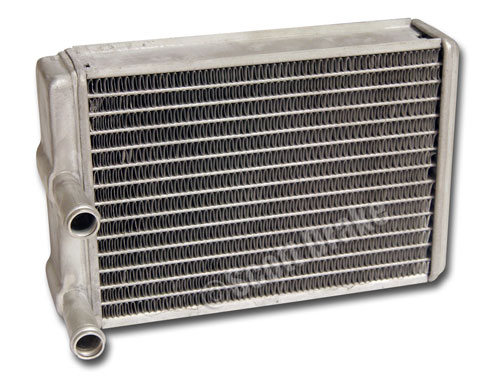 One version is a new aluminum Heater Core that has been redesigned in order to be an exact replacement and proper fit for the 65-68 Mustangs as listed above.  These Mustang Heater Cores are very nice and are manufactured by Scott Drake Mustang Parts.  This aluminum version is our part number IN-9022. 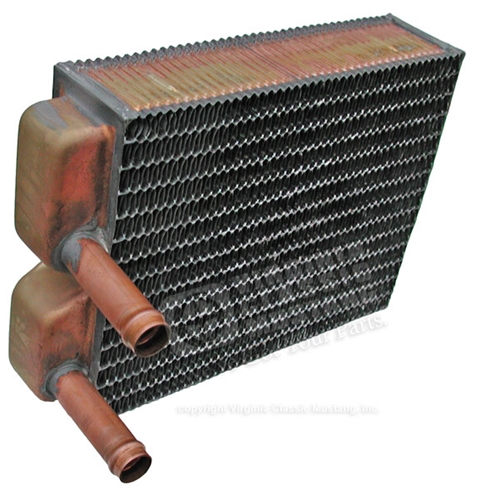 We also still have the original copper/brass design Heater Core.  This version is our part number IN-8304.

Email ThisBlogThis!Share to TwitterShare to FacebookShare to Pinterest
Labels: heater 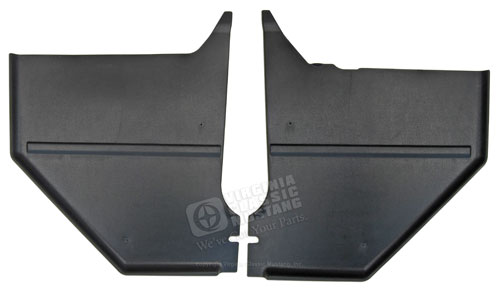 Almost every 65-68 Mustang needs new kick panels.  Those original plastic kick panels are almost always broken or cracked, particularly at one or more of the screw holes.

We have been extremely pleased with the quality of the kick panels that we have been offering for many, many years.  We still like them, but the bar has been raised.

We now handle a kick panel that is very difficult to distinguish from most originals.  If you are restoring a Mustang to a high level, or you just simply like to have the best for your car, you may want to check out these new kick panels.

﻿
﻿﻿
﻿
﻿ ﻿ So, what is the difference?  Well, this Concours Kick Panels feature the exact molded-in ridge, contours, texture, grain and thickness as the originals.  The screw holes are even "reinforced" with molded plastic on the back side like the originals.  Note: The two factory hole locations are correct for late 65-66 . Earlier Mustangs had one additional hole.
﻿
﻿
﻿ ﻿﻿
﻿
﻿ ﻿
You can find our complete selection of Mustang Kick Panels by clicking here.

Here are the links to find them on our Virginia Classic Mustang Online Parts Store:

Here is another "picture update" of our '65 Mustang HiPo Convertible project. 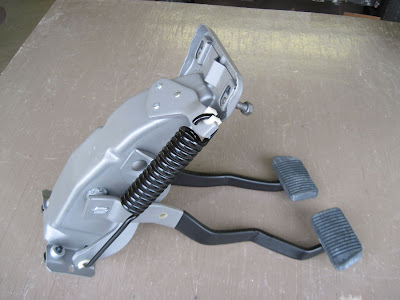 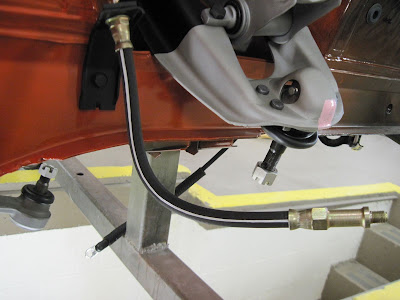 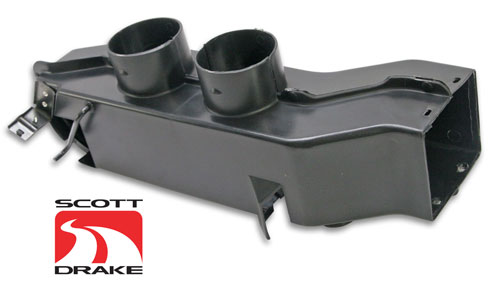 Just about every 65-68 Mustang needs a new Heater Plenum.  The original plenums were constructed of a pressed board material that just cannot hold up over a long period of time.  Original heater plenums are usually torn and warped from water/antifreeze damage.  This Plenum directs the air flow to either the defroster hose to the windshield or to the floor. 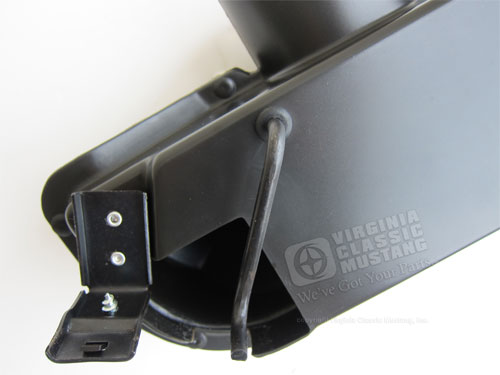 The Mustang Heater Plenums that we handle are molded from ABS plastic.  They come in a dark gray color to replicate the color of the original cardboard plenum.  They feature the correct bracket, grommets for the flapper door rod, and a metal flapper door with pads.  They are a tremendous improvement over the original cardboard Heater Plenum.  The price is also incredibly reasonable.  Order our part number IN-546. 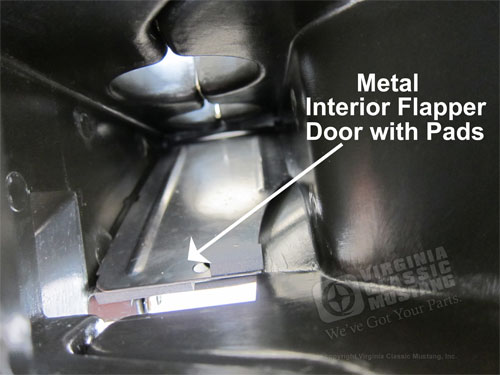 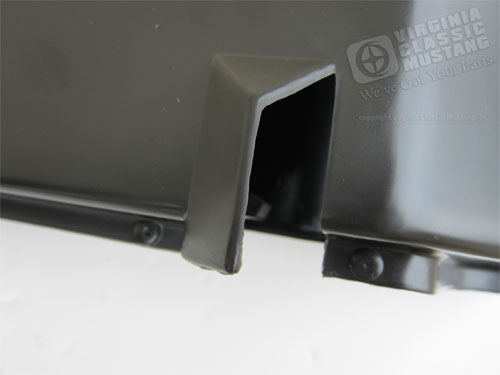 Email ThisBlogThis!Share to TwitterShare to FacebookShare to Pinterest
Labels: heater

We are continuing to make progress on our '65 High Performance Mustang Project.  Jeremy at Maple Hill Restoration has been working hard on installing the side glass, finishing the details under the dash, working on the seats, and other areas.

Take a look at some of our recent progress in these images. 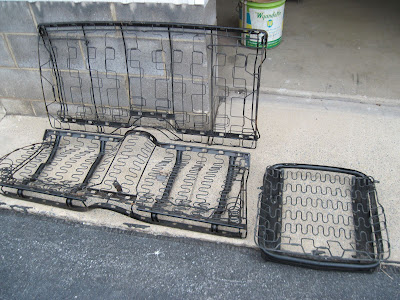 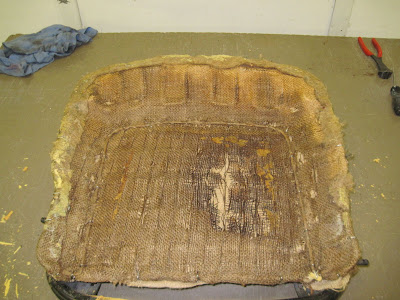 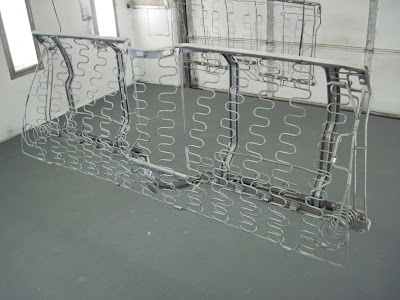 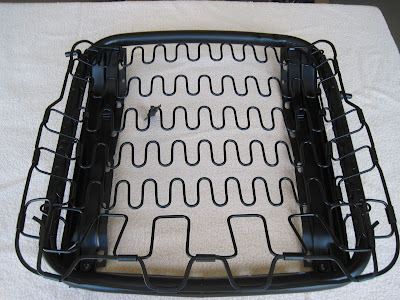 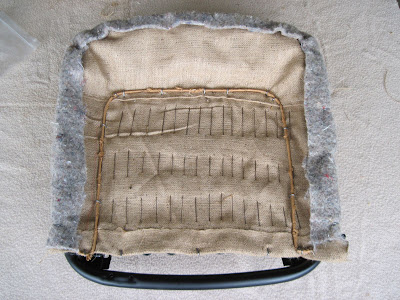 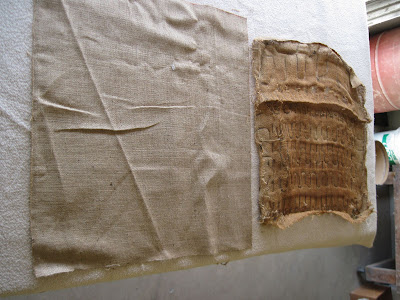 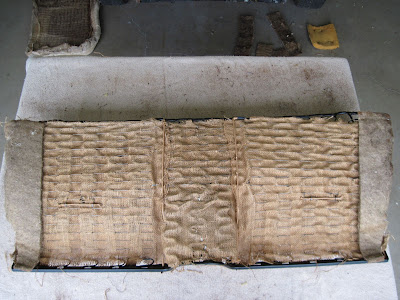 Within the next week or so, we should have an update with the seat foam and upholstery installed.