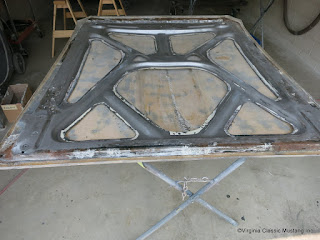 Our early '66 GT350 restoration project is back on track with the restoration of the original hood. The rest of the body work is completed, and this is the last panel to complete before the preparation for paint begins.  Jeremy at Maple Hill Restoration took these pictures of the hood as he prepared it for its "new" metal frame.

Throughout 1965-66 GT350 production, one of the problems was the hood situation.  All of the cars received a hood with the now-familiar scoop, but many styles and suppliers were used throughout the production.  The earlier cars received all fiberglass hoods.  Later a fiberglass with steel frame hood was used.  As '66 production commenced, these hoods were used for a while and later all steel hoods were mixed in production.  Generally, this pattern was followed until the end of production with batches of all steel and fiberglass with steel frames being used.

Close inspection and disassembly of the original hood for 6S033 showed the many problems with the original production.  The fiberglass skin appeared to be originally bonded only around the outer edge to the metal frame.  The inside of the frame was also not finished, painted or protected well.  All of this added up to lots of moisture and dirt getting trapped between the metal frame and the fiberglass skin, which in turn caused rust to form on the frame.

Jeremy carefully removed the fiberglass skin from the frame.  Luckily, the outside skin was in fantastic shape.  The next step involved finding a '65 style metal frame.  This was sourced from a nice original hood that we had saved from another car.  That frame was separated from its original metal skin.

The frame was then carefully fitted to the original fiberglass skin by trimming and aligning both pieces.  Jeremy then completely stripped and cleaned the frame.  The frame was then metal etched, body worked, primed and painted.

Later, we will have pictures on the skin being bonded back to the painted frame.  This process will be much more thorough than the original process.  The hood will be completely glued together and then finished on the edges like the original.