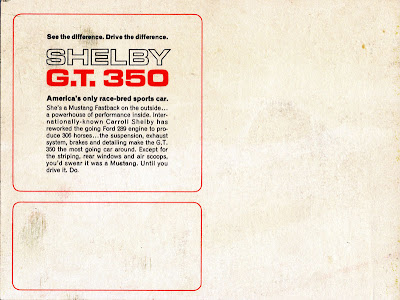 I don't really collect literature, but I like neat stuff when I see it. I'm partial to the early GT350's, so I think this post card from 1965 is pretty cool. As far as I know, that should be the first '66 Shelby GT350 - SFM6S001. It is the same one that is pictured on the brochure for that year. It is sporting the 14 inch ten spoke wheels with the Shelby Cragar center caps. The ten spoke wheels did not appear until later in the production of the 1966 model, and a different center cap was used.