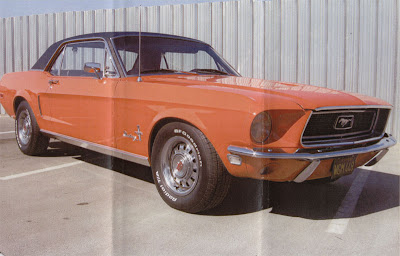 We have gotten a ton of response from a Blog entry about Karen Rose's special order color Mustang. Here is a letter from John Blackburn about his "special color" 1968 Mustang Coupe:

Thanks Karen for the Special Paint research. In the Spring of 1968, I loaned my mother, Grace Blackburn, the $500 down payment for a 1968 “papaya” (according to the salesman) colored Mustang coupe with a black vinyl top and matching papaya colored rims and baby moon Mustang hubcaps, during a 68 “Spring Fling” Mustang sales event at Jones-Minto Ford in Burlingame, California. Now I know it is Madagascar Orange and not papaya.

I still remember the day she came home so excited and said she had found the Mustang she wanted to buy. Our neighbors were the first to get not one but two sparkling 1965 Mustang coupes from Dixon Ford, one for the family and one for the oldest boy. We drove to the dealer and there lined up against the back wall of the sales lot with a “Spring Fling” banner above the cars were Mustang coupes of colors never seen before – orange, yellow, gold, coral, blue and green. It was a rainbow of colors! The Madagascar Orange, that the salesman referred to as papaya was her choice.

To know my Mom was to know that, like Karen’s grandmother, the color she chose was very much in line with her personality and spirit. She and that car shined everywhere they went. It was the first new car she ever had in her life and she loved that car more than anyone will ever know. I kept her washed, waxed and serviced and got the keys from time to time.

I went on to own a 1969 white with red interior Mach 1 428 CobraJet with a C-6 (hence my nickname JohnnyCobraJet) and a 1969 Maroon Boss 429 with black interior and gave up both of them to too many tickets and way to much fun!
Mom died in 1985 and left me the car which I have garaged as much as possible, towed my 16 foot Gaston tri-hull ski boat with from Long Beach to Lake Shasta and other California lakes many times, and drive it regularly. She still gets people staring and everywhere I stop there are always lots of questions and admiration for her color and condition. And she has a trailer hitch on the bumper!

My dad passed away in 2003 and with some of my inheritance, “Gracie” turned 40 this year and spent four months at the RESTOMOD Shop in Stockton where Pete and the guys did an unbelievably beautiful job restoring her to the original condition, luster and color. Years in the moist San Francisco foggy climate took its toll – rust removal was essential, especially on the roof which had to be media blasted and sealed, a new black vinyl top, new hood and trunk and all new chrome, mirrors, handles and hinges, and most importantly a detailed stock engine compartment that sparkles! I also had a new heater core installed as well as a new gas tank with OEM sending unit and fuel line from tank to engine, and finally a headliner and a Custom AutoSound radio, 10 disc CD changer in the trunk and Infinity 3-way speakers on the new package tray. It was $28,720.11 of the best spent money of my life!

The “Special Paint” paint match was difficult, because there is no color code, but absolutely spectacular! It was my understanding that for special colors, the shop was to furnish to the Detroit office the DSO or PTO number and serial number from the warranty plate. In any event, the Madagascar Orange can’t be had any longer but Pete, his paint guy and crew got it right on the mark. The interior of the trunk is still the original color and I have all five of the rims and 4 caps to match.

Everyone is amazed at the car which was 174,000 miles on a rebuilt 289 (at 120,000 with the installation of an R.V. cam, headers and a 600 CFM 4 barrel) with original c-4 still working great. In 2002, I had front (non-power) disc brakes installed. In 2005, I had Scott Drake suspension components (springs, sway bars, bushings) installed lowering it front and rear and vastly improving cornering and stability. Gracie now glides around corners with stability, no body roll and a self-assurance she never knew in stock form. She still has her original interior, dashboard and carpet and new front (only) seat covers and a new wood grain steering wheel.

She is ready and registered for the April, 2009 Mustangs Across America caravan from Las Vegas to Birmingham, Alabama for the 45th Anniversary of the Mustang and then we are doing Route 66 back to California. I will have a new automatic overdrive transmission installed prior to the trip. Gracie will shine the whole way thanks to Pete and the guys at the RESTOMOD Shop!

We want to thank John for sharing his story!

I love the color combo - hard to tell from pics, but looks kind of like poppy red? Either way, it looks great with that black roof.

John, We really enjoyed your detailed story about your amazing restoration and lifelong love of Mustangs! Thanks to Virginia Classic Mustang for forwarding your letter to me. My dad will keep an eye out for your car in San Francisco! My Mustang is looking very sharp these days since I fixed the roof, and replaced the carpet and dash all for under $500. We definitely have both ends of the spectrum covered as far as restoration on this car is concerned! You can see a little book I designed at CCAC about my car. Below is the URL.
Hope the tour goes great!
http://www.karenrosepaintings.com/graphic_design/COURSEWORK/index.htm

Ive also got one of the 1968 Rainbow Mustangs... I will have to get some pictures of it to post. but heres the info on the car

In research I did for my mustang book I found these were some of the colors advertised at that time:

We have across the pond a 72-1194 "olive" 68 Hardtop (a Branded Special) and wonder what the Ford color code WT7105 indicates of those Rainbow colours, most probably the Forrest green?
See www.ponysite.de/68brandedspecial.htm for more info.

My Dad is the original owner of a 68 that is this color. It was sold in the denver sales district as "eastertime coral" It is the same paint code as the madigascar orange. I have personally seen 2-3 other cars running around colorado. As I recall, they all had either the sprint A or sprint B package. Do you know how many cars this color were sold in CA? From what I read, there were 10-15 eastertime coral cars sold in Colorado making it a fairly rare car.

Thanks for your information. We would love to see pictures of your Dad's car if he still owns it.

As for how many of these cars were made, I am not sure.

Specific information on a particular car can be obtained from www.MartiAuto.com